Goldsboro is located in Wayne County in eastern North Carolina.

The town of Goldsborough was incorporated into Waynesborough in 1847, and the name was changed to Goldsboro in 1869. The town was formed because the Wilmington and Raleigh Railroad line was built running through it. A hotel was built at the intersection of the railroad and the town's main street and a community formed around it.

In 1961, Cold War B-52 bomber was damaged in a storm and forced to drop 2 atomic nuclear weapons over Goldsboro. One of them floated down with a parachute, but the other fell into the Nahunta Swamp. It was unable to be recovered and remains in the swamp to this day. 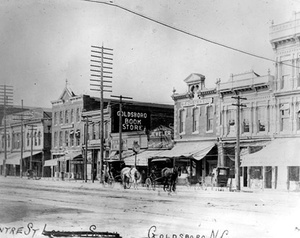 Goldsboro is the county seat of Wayne County. According to the 2010 census, the town has a population of 36,437 people.

The town is home to almost 100 restaurants, ranging from fast food to casual dining.

Goldsboro is home to Seymour Johnson Air Force Base. It is home to the 4th Fighter Wing. The base was established 5 months after the start of World War II. It was named for U.S. Navy Lt. Seymour A. Johnson, a test pilot and Goldsboro native who was killed in a crash on March 5, 1941. The city of Goldsboro annexed the air force base on February 7, 1977. 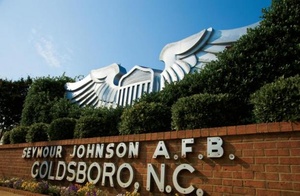