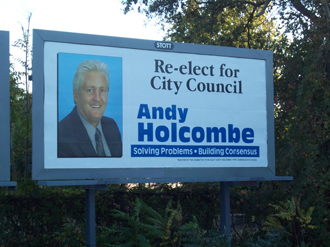 Andrew Holcombe is a public interest lawyer who goes by "Andy." He is a member of the Chico City Council and served as mayor from 2006 to 2008. He is 51, has a daughter and son, but is divorced. Despite that, he says on his website that his great sense of family helps him appreciate Chico, where he has lived for over 29 years. His primary operating motive has been to "give people a 'voice'" — something that he has accomplished through pro-bono service as a lawyer and as mayor and councilman of Chico.

As mayor, Andrew Holcombe had at times been a controversial speaker due to his political point of view. Some local media outlets have complained that he shouldn't make statements on certain issues during public engagements, but he has been careful to note that he is speaking for himself and not the City of Chico. As a very public face for the city, he walks a fine line. Despite these difficulties, he continues to be invited to speak at many events.

In 2006, he ran for councilman on a platform that considered well-planned growth and economic development as paramount. Since he had a great deal of experience with the Chico Area Recreation and Park District as a board member, he desperately wanted to ensure that Chico's "parks and open space... [would] not to be lost over the next twenty(20) years." Other areas of focus included the public arts, parking, public safety, and, as emphasized on his website, the concerns of all Chico citizens.