Please note: This article is about Chico, the place. There are also articles about the City of Chico, municipal government, and the people of Chico who are called Chicoans. 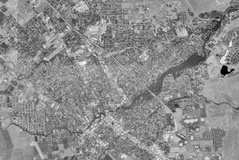 Chico by satellite in 1998. Courtesy of Terraserver and USGS 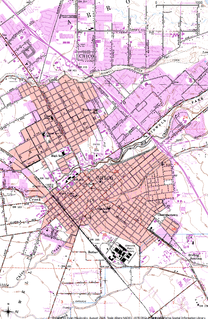 Most of Chico, 1978, on USGS 7.5x7.5 minute topographic map. Data from the California Spatial Information Library.

The City of Chico, CA (population 105,080), "The City of Roses", and home of Sierra Nevada Brewing Company and Chico State, is a great place to visit or reside! Chico is surrounded by almond orchards, geologic formations, spring-fed creeks, and many other features that nature lovers are so fond of. Chico is easily accessible from Interstate 5 (take SR 32) and Highway 99. It is situated in the northern California Central Valley, near where the Sierra Nevada ends and the Cascades begins — with nearby Mt. Lassen Volcanic National Park. Indeed, Bidwell Park snakes from Downtown into the foothills of the Cascades, following the refreshing Big Chico Creek. It's the 4th largest municipal park in the United States and has been the location of several films. Chico has been designated as a Tree City USA for 23 years by the Arbor Day Foundation.

One of the first things you'll notice upon visiting Chico is the extraordinary prevalence of Sierra Nevada Brewery sweatshirts and shirts worn by residents and university students. Chico is known, nationwide, for Sierra Nevada's Pale Ale — their best selling brew. In fact, according to IRI Scan Data, it's the #1 selling craft beer in America. Sierra Nevada, one of Chico's largest employers, is also a huge believer in sustainable practices.

Chico is a bicycle friendly town with bike lanes on many major roadways. Students at Chico State find the bicycle as their best bet to get around town inexpensively. Mountain Bike enthusiasts enjoy many trails, including those at Upper Bidwell Park. Professionals might find themselves in the annual Chico Criterium. At one point, there was even a Yellow Bike Program where citizens could borrow a free bike and ride wherever desired. It isn't any surprise that in 1997, Bicycle magazine named Chico as America's Best Bike Town.

Art is also a big part of Chico's culture. Art is everywhere. Even the City of Chico commissions artistic works in public spaces — from benches to sculptures. The annual Artoberfest and Artisan's Faire are prime attractions, while many artists have open-houses and events on a regular basis. Music is art too, so there is little surprise that a music scene thrives in Chico.

If you're new to Chico, you may want to check out the Chamber of Commerce for detailed visitor information. If you've just relocated to Chico, be sure to take a look at the Driving in Chico page. Less seriously, you should be aware that interesting rumors abound about Chico, both past and present. So have a bit of fun and take a look at some urban legends. And while you're at it, you might as well become familiar with new and old traditions — in fact, a few began generations ago. For instance, a longstanding tradition is the Pioneer Day Parade which has been celebrated every spring since 1917.

Finally, you may have noticed that Chico isn't laid out as one might expect (North-South grid). Perhaps this is because Big Chico Creek influenced the founders, since many roads run roughly parallel to it. But Chico can be split into various regions with a little bit of creativity: Central, Downtown, East, North, South, and West. You might also want to learn about Chico's ZIP Codes.