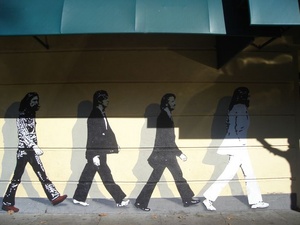 The Beatles made at least one appearance in Chico. So it's in the form of a mural in downtown, but it's more than most towns can boast. You may have noticed the Fab Four walking down the 100 block of Main Street and wondered why. It's hard to say exactly why the Beatles are memorialized on the wall, but it surely did make a bit more sense back when Main Street Music was located on that block. Beatles fans will immediately recognize its overwhelming similarities to Abbey Road's cover art.