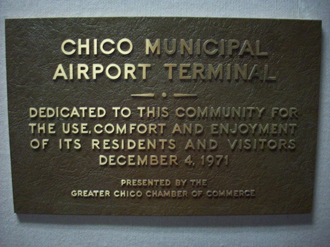 The Chico Municipal Airport (Commonly known as CMA, or by the airport code "CIC") offers service to and from San Francisco International via United Airlines, is a base for the Department of Forestry fire-fighting air tankers, and home of many private airplanes. In addition, the airport is surrounded by an industrial park providing around 1,500 jobs 1. Expansion of the park is being considered and will take large amounts of public investments in order to develop required infrastructure. It is interesting to note that the airport was the terminus of the Sacramento Northern Railroad — now a bike path.

In 2007, Chico thought about pursuing opportunities for flights to and from Los Angeles and other major cities such as Portland, perhaps through Sky West 2. Such endeavors are important to the economic growth of Chico.

The Chico Municipal Airport is the annual host of the Chico AirFest in September.

On July 31, 1961 the first-ever hijacking on United States soil occurred at the Chico Municipal Airport. Two men were critically wounded and the hijacker was sentenced to more than 30 years in prison.3

On October 24, 1961 was launched from the airport the the first of many stratospheric balloons under management of the Air Force Cambridge Research Laboratory (AFCRL). After a trip to the east coast of near 51 hours, the balloon was terminated 200 Miles east of Boston, in the Atlantic Ocean.

In 1992, a ceremony was held dedicating the airport as Morony Field in honor of Judge Jean Morony.4

The CMA is a full-service airport, providing weather conditions, controlled airspace, Fixed Based Operator, fuel, hangers, and more. The tower is open from 7am to 7pm daily, controlling a 3000ft and 6722ft runway in addition to fairly uncongested airspace. The airport is also accommodating to pilots in training.

For further details and to view an FAA map on the CMA, see its Airnav information page.

Parking is free for both long and short term lots. See the parking map (on Airport's website).

2008-10-18 08:22:28   From 1945 until I joined the Marine Corps in 1951, I lived with my parents in the firehouse at the airport, one of two familys that lived and worked for the city of chico on the old base. I just visited there, (missed the museum as wrong day) it certainly has changed. My favorite playing, fooling around spot was the BOQ area, it had a big swimming pool and lots of old buildings full of abandoned equipment of all discription. It's now all little league baseball fields. I'm sorry I don't have any old pictures I could send or I would. Ed Pace [email protected] —216.180.182.18