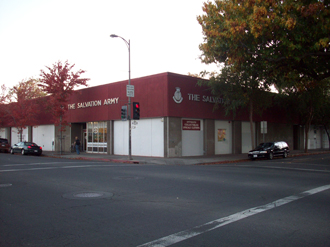 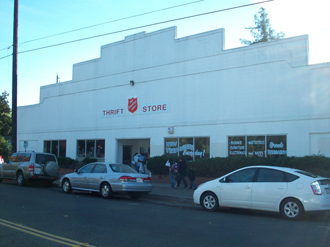 The Salvation Army is a religious organization that provides services to people in need within the community, including disaster relief. They are funded mainly by donations (often collected by bell ringers outside stores during the holidays) and through sales at thrift stores. The Salvation Army has three stores in Chico, two of which are located on Broadway.

2010-08-18 09:04:15   How is it that the Salvation Army has the right to over price clothing and furniture that have been donated to them, being given to them free of charge, nothing out of their pocket! I was shocked when I went in to one the other day. They had a dining table and chairs for the sticker price of just under $400.00, “gulp!” they were nice, but come on! I really do think that some one should be a little more realistic about the pricing. And that goes for their “Elite” Salvation Army thrift store as well. —98.208.92.123

2012-05-27 07:19:06   The "design" of the store is to bring income to the needy...by providing shelter and food for the homeless, rehabilitation for the addicted, food boxes for those families who are struggling. That is what The Salvation Army is really doing with the income...not providing "cheap" stuff for those who just want to bargain shop. Also, they have overhead on those donations...trucks and gas to pick it up, people to process it, lights to keep on, maintenance of buildings and structures...that same as everyone else. —97.93.73.134

2012-07-23 09:17:15   I feel that the Salvation Army is reasonably priced! They often offer dollar days on certain items, half off of anything that has been in the store for a while and somedays you can fill a bag for $5. The people that work in the store are personable. The "Elite Repeat" on Broadway, I do feel is a little bit over priced but you pay for what you get. I bought a bedroom vanity there and it is very sturdy and it was cheaper than any other place in town. The Salvation Army provides services for many people that are really in need, so if I pay a little bit extra I'm okay with that, but I don't think $3- $6 is too much for a pair of jeans. —208.53.72.158