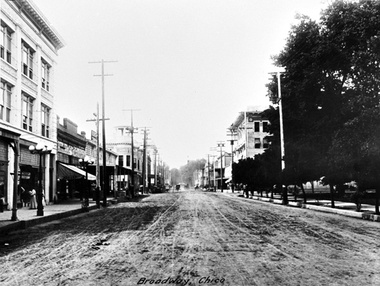 Broadway facing north from West Fifth Street ca.1910 (MLSC) Broadway Street is one of the two main streets that run through downtown Chico. It is a one-way street parallel to Main Street, but running in the opposite direction. Broadway begins where the Esplanade ends, at the intersection with 1st Street and runs to the southeast. It passes through the numbered streets of downtown, ending where it crosses Highway 32 (8th Street) and becomes Oroville Avenue. Broadway is a part of Business 99, the main thoroughfare for Chico before the Highway 99 freeway was built.

Although Broadway is one of Chico's main thoroughfares, it is also one of Chico's quiet residential streets on its south side, as it enters the Barber Neighborhood at the bridge over Little Chico Creek.