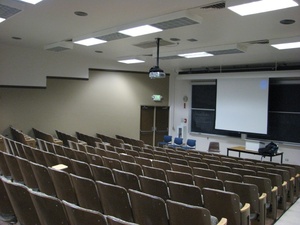 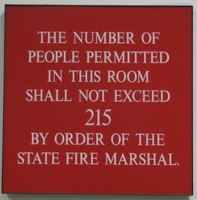 176 Everson is the main lecture room in Everson Hall. It was once thought to be the tackiest and ugliest lecture hall on campus. As of Fall 2005, the room has been updated with new seats and a tan/dark brown colored theme. Features of the old room included a pink and teal color scheme and walls adorned with corrugated and perforated steel. It was totally 80s. There was also a constant high-pitched ringing sound that would drive anyone who could hear it insane.

On the plus side, there's a vending machine nearby. 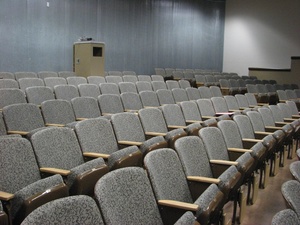 2010-12-05 02:44:49   I will always remember the time I took Abnormal Psychology in this room. Abnormal Psychology was a class that attracted many non-students to sit in on the class. It was a really informative and fascinating class. One day there was a woman who had brought in an old fashioned typewriter into the classroom. She was typing notes during class. The typing noise was so loud that you could hear it throughout the classroom. It was obvious that she was not a student, and she seemed a little mentally unbalanced. My professor was a really cool guy. Instead of calling her out and asking her to leave the class, he turned off all of the lights in the classroom and started a friendly chat with the class in the dark. He was really good at diffusing that situation. —MaxLucas