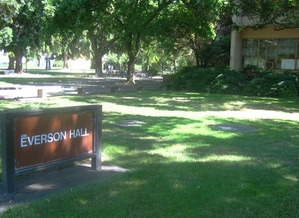 Everson Hall was named for Gladys J. Everson and is home to the department of Textiles & Clothing as well as the Communication department. It is located in the southeastern part of campus, just south of Shields Library and adjacent to Chemistry. Its main lecture hall is 176 Everson.

It was built in 1952 and originally served as theHome Economics Building.

The Unitrans bus stops just in front of Everson, and Mrak Hall is a mere hop-skip-and-a-jump away, which makes Everson's location very handy for students who are on the up-and-up.