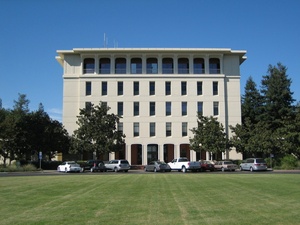 south side of Mrak Hall Mrak Hall is the primary location of the UC Davis administration. It was built in 1966 and is named in honor of Chancellor Emil Mrak. The Chancellor's office is on the 5th floor of Mrak. Also housed here are the Offices of the Registrar, Graduate Studies, College of Agricultural and Environmental Sciences Dean's Office, Community Relations, and the Undergraduate Admissions and Outreach Services.

Several Eggheads are nearby the building. Eye On Mrak (Fatal Laff) sits on the north side of Mrak Hall and keeps the administration in check. See No Evil Hear No Evil are situated playfully in the center of the circle in front of the building. They used to sit in front of King Hall on similar mounds.

As campus tour guides say, Mrak Hall, as is the myth, was named when construction workers, erecting what is now the building as it stands, heard the ducks in the Arboretum vocalizing, "Mrak, mrak, mrak." The workers then decided that the structure they were building should be called Mrak Hall.

Can you find the odd fake owl in the picture on the right? 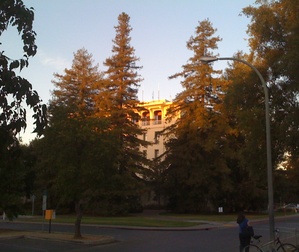 at sunset through the trees 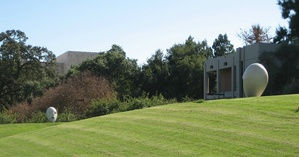 Eggheads See No Evil Hear No Evil In the grounds surrounding Mrak Hall are:

Notable Events On November 19, 2009, students converged on and occupied Mrak Hall to protest the 32% student fee hike approved by the UC Regents earlier that week. This demonstration resulted in around 50 students having been arrested. Aggie article: Nearly 50 arrested in Mrak Hall demonstration TV coverage: ABC News 10

On May 23, 2007 Mrak Hall was locked down in response to protesters supporting contracted food service workers hired under Sodexho in becoming UC employees. Protesters who were inside were eventually arrested. The 15 demonstrators arrested included students and workers.

On May 5, 2007 Mrak was locked down in response to workers and their supporters waiting in the lobby of the 5th floor while a meeting was held between the Chancellor, Vice Chancellor, students, workers, ASUCD representatives, and others in regards to the worker-campaign.

In January 2007 an electrical fire in a graduate studies server room caused $75,000 worth of damage. The UC Davis Fire Department and the Dixon Fire Department responded. No injuries were reported.