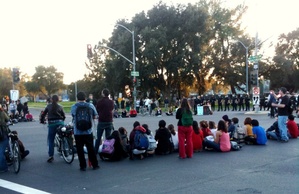 This page serves to catalog protest and picketing events that have occurred (or will occur) in Davis.

Both plainclothes law enforcement and uniformed officers were typically present at protests in the past. In April of 2011, UC Davis officials agreed to discontinue undercover monitoring of student protests. Filming any event with LEO presence now occurs as a matter of course.

January 14, 2017 UCD students blocked the entrance to the Science Lecture Hall in protest of an event, set up by the Davis College Republicans, hosting the far right editor of Breitbart News Milo Yiannopoulos and Martin Shkreli, a former former pharmaceutical executive charged with securities fraud. The protests began at approximately 6:00pm, with counter-protesters arriving around the same time, and lasted around four hours until the protesters succeeded in shutting down the event. Despite some, including Yiannopoulo's, claims, the UCD PD has confirmed that there was no property damage, hammers, or broken windows. The protest was mostly peaceful, the only exceptions being the tearing down of the police barricades, a drink thrown by either the protesters or the counter protesters, a coffee spilled on a reporter's shirt, and a protester spitting in the face of a Breitbart cameraman. One arrest was made early on for trespassing. The protests polarized the Davis community and sparked debate about the aspects of free speech versus hate speech. 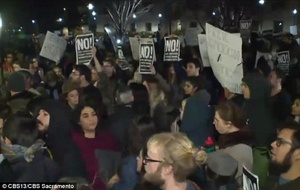 November 19, 2014 UCD students marched, occupied Mrak Hall, and pitched tents on the quad in protest of the proposed 25% tuition increase. The protests loosely marked the anniversary of the pepper spraying during the 2011 protests.

November 16-18, 2011 OCCUPY UC DAVIS UCD students camped out on the quad overnight to protest tuition increases and exercise their First Amendment right to peaceably assemble, despite the campus' no-camping policy. Police told the protesters to pack up their tents and leave the quad at 3pm on Friday, but many students refused to leave. They formed a human chain around the tents and practiced civil disobedience. The video at the bottom of this article shows police pepper-spraying the protesters in the face. According to the article, at least 10 protesters were arrested.

November 15, 2011 Hundreds of UCD students and faculty members went on strike to protest the never-ending tuition hikes, as well as the police brutality on the UC Berkeley campus. Initially meeting on the Quad, many of the protesters continued their statement by occupying Mrak Hall.

October 2011 A proposal to Occupy Davis

September 2011 One to four people have been on the Dave Pelz Bike Overpass of I-80 many mornings throughout the month, beginning September 12, holding a banner with the vague wording, "Mori Seiki hurts our community. Shame on them!" On September 27, one of them was wearing a grim reaper costume and holding a scythe.

May 25, 2011 Protesters marched to Mrak Hall in support of The Domes.

May 1, 2011 Democrats and Republicans at the UCD campus held a peaceful rally supporting the United States assassination of Osama Bin Laden

April UC Davis students and the ACLU says that campus administrators have been spying on student protesters. This Vanguard piece has further details. 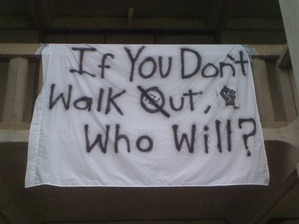 August 2010 A group comprised of police officials and administrators was established to monitor protests. The group is called "Activist Response Team". There are reports of their use of undercover cops and undercover surveillance.

May UC Davis student athletes protest sports cuts with coffin procession UC Davis women's rowing team, along with the men's wrestling, swimming and diving teams will be eliminated at the end of this year.

March 4, 2010 Public Education protest. Student protesters clashed with law enforcement during the public education protest, as students marching were forcibly barred from marching onto I-80, with less-than-lethal weapons deployed and one student arrested. This was done in solidarity with communities from all over the world. 10 News photo slide

November 18-20, 2009 Students converged on Mrak Hall on November 19 to protest the UC Regents approval of a 32% student fee hike that will happen over the next year. Students' reaction to the UC Regent's vote was covered by ABC News 10. As these budget cuts affect all UC students, protests have also taken place at other UC campuses. Several students were arrested at Mrak. 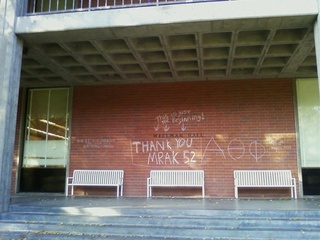 Found morning of 23 November 2009 on the east side of Wellman Hall. An apparent congratulatory statement towards those that were arrested after protesting after hours inside Mrak Hall.

About 100 students protested in Dutton Hall on the afternoon of November 20. The protesters were in Dutton instead of Mrak because Mrak was on lockdown following the protests the previous night.

February 9th, 2009 Brother Jed Smock returned and once again protested homosexuality, rock and roll and feminists among other modern evils on campus.

February 10, 2008 Protest of Scientology. There are no branches of the Church of Scientology in Davis, but many Davisites are expected to attend protests in Sacramento and San Francisco. See the Scientology page for details. 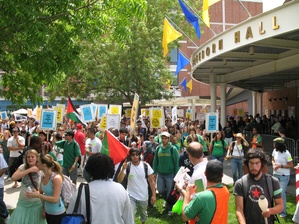 Fight for UCD contracted-out food service workers, fight to end the U.S. war in Iraq, and to end the targeting of undocumented immigrants.

Several anti-war demonstrators were seen at "G" and 3rd Street, quietly protesting the continued American presence in Iraq. Their appearance was complete with signs, long hair, and colorful shirts. A contributor to the Wiki remembers one sign, that said, "No More War Funding". Perhaps the timing, on St. Patrick's Day, was deliberately planned for maximum audience. 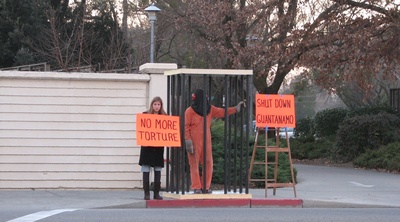 The Church of the Divide has picketed the First Baptist Church over Freddie Oakley having decided to issue Certificates of Inequality.

November 7 Preachers with Signs protested outside the MU.

October 2006 Preachers with Signs showed up on the Quad.

The Davis Life Chain was held along Russell Boulevard on Oct 2nd, 2005 with a couple scores of people holding a number of signs including ones that said "Abortion Kills Babies". They (the people including members of different Churches as well as from Students for Life at UCD) were called on to reflect on the issue of abortion and how it has affected society. They were also asked to reflect on how they can promote change and end abortion. They looked very serious. This may have been because they were praying and reflecting. On the other side of the street, a bunch of vibrant college and high school teens (mostly women) held signs that said, "Pro Women / Pro Choice" and other similar spinoffs of the message. The Davis Life Chain expressed a message of life often lacking from popular culture and the media and allowed for people to express their belief in the rights of the unborn.

May 16 More Preachers with Signs!

April 26-28 Preachers with Signs protested outside the Memorial Union.

UCD students protest the Vietnam War by planting 500 white crosses on the Quad.

People from West Hall during the middle of the night sneak copies of a special edition of the California Aggie onto the desks of legislators at the Capitol in Sacramento. The edition details the poor conditions of buildings at the school that is now UC Davis.

Additional Coverage Video from inside of Mrak Hall during protests

2007-11-27 20:51:03   Thee were at the UCD campus too, a few old men and alot of girls in their teens. Big signs with pictures of fetuses and comparisons to Hitler. Not the classiest group, but they were polite when I declined their lit. —AndrewPeake

2007-11-27 23:13:30   Could've been the Genocide Awareness Project. They've been known to come to Davis in the past. However, normally their protests are highly organized and planned in advance. Perhaps abortion-oriented Preachers with Signs? I seem to remember one incarnation with "Redefeat Fascism" + "I Have a Dream" of MLK's fame = Anti Abortion Activists, around and on the Day of the November 2006 Election. —MaxMikalonis

2009-11-22 23:05:13   anyone interested in the recent protests and occupations should take a look at this manifesto from a group out at uc santa cruz. http://wewanteverything.wordpress.com/2009/09/24/communique-from-an-absent-future/ —ashiggins