This is one of several pages on the topic of the Olive Drive Railroad Fence. 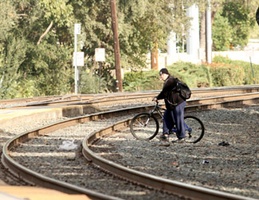 A Davis resident crossing the tracks

"Historic call to the event and press coverage link can be found below . . . "

The Event: The protest went off without a hitch and was quite peaceful and civil. It was a cold and damp Sunday, but about 40 people showed up despite the weather and gathered with signs such as "Don't Fence Us In!", "The Fence makes No Sense", and "One State Solution for Davis". We gathered in a circle and people spoke their minds.

Two City Councilmembers (Krovoza, Swanson) showed up to support a comprehensive solution to the problem. They voiced concern that the fence—without any sort of crossing—as a "solution" occurred without substantive input or discussion or consideration of safe passage to and from Olive Drive in relation to the tracks. The route of their criticism lies in process and lack of a comprehensive approach, as well as the potential for creating other problems (unintended consequences that could reduce safety). YouTubes of some of the speeches are available on-line (see Davis Vanguard link below for YouTube links).

Channel 13 sent a cameraman/reporter to cover the event, and the Davis Voice, People's Vanguard and Enterprise each sent reporters (see press links below). Davis Police showed up at the beginning of the event and again near the end but did not disturb anyone and did not cite anyone for crossing to get to the event. Union Pacific police did not make an appearance and trains ran as usual. Village Bakery sold a couple of dozen "Protest Pizza" slices.

HISTORIC WIKI CALL TO THE EVENT on DEC. 5th

Join Davisites from both sides of the tracks

What's Up: Unless the Davis community on both sides of the tracks get's moving, Union Pacific is going to build a 3800 foot fence from Richards Blvd. almost to Sudwerk. This could happen as soon as year's end. The fence will divide our community, isolate Olive Drive from the rest of Davis, and lead to the destruction of many healthy trees. Davis needs a safe and legal way to cross the tracks so we can visit our neighbors and shop in Downtown Davis. Join us on Sunday and express yourself on this important issue.

Please bring your friends and neighbors. Make a sign.

Have a slice at Village Bakery! $1 off "protest pizza" slice during protest Noon-1pm, limit one slice per protester.

REMEMBER TO STAY OFF THE TRACKS during the protest!

2010-12-05 05:04:45   Yes, of course people should stay off the tracks at this protest. But that does contradict the message of the protest, since the real contention is that people want to be able to cross the tracks illegally.

The fact is that this section of Olive Drive is the most dangerous half mile in Davis. Davis does need a safe and legal way to cross the tracks. It does NOT need the existing unsafe and illegal method. —GregKuperberg

It hangs around as historical information, which is a big part of the wiki. Ideally, it gets linked from a few different relevant pages to get tied into the historical record. Speaking of which, I think I'll add it to Protests. —TomGarberson