For the last 30 years, there have been budget cuts in the California higher education system (UC, CSU, and community colleges). The California legislature has been paying a smaller and smaller percentage for higher education over time (see last graph on this file) while students and their families have had to directly foot more and more of the bill — which has allowed the general populace to pay a smaller percentage of the bill, which could be seen as a good thing if taxes had actually gone down proportionally (which they haven't). Then again, taxpayers of California committed to paying for higher public education for all who qualified when the California Master Plan for Higher Education was developed.

What are the consequences of budget cuts in the UC and UCD? "Furloughs" (pay cuts), libraries closing, student fees increasing, layoffs, online courses — etc. The Death of the California Master Plan for Higher Education.

In particular, every students' educational fee will increase 32%. Undergraduate tuition will increase $2,378 per year, going from $7,473 to $9,811. This follows a long line of fee increases, as seen in the historic data: UCD student fees.xls

In a YouTube video posted on June 17, 2010, UC President Mark Yudof gave an update on the state budget process and UC's advocacy efforts in Sacramento.

History of the UC Budget 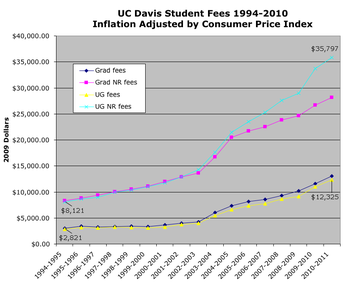 Student fees rise ever higher — California has abandoned us

The UC administration generally blames Sacramento for rising tuition and employee "furloughs". See ucpay.globl.org's "A Crisis of Priorities" for reasons why this is misleading, and why the UC administration and regents are themselves for protest. Check out Budget Lies on UniversityProbe.org as well. 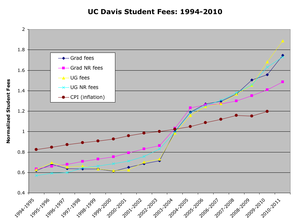 Fee increases as compared to the CPI (red line). All values are normalized.

Numerous protests at UCD have occurred in response to the approved and proposed solutions to the budget cuts.

The UC Board of Regents made plans to cut funding, while at the same time giving a top administrative aid a 26% pay increase of $61,000.

2009-11-21 23:04:10   Whoa, so if my dad decided to work a little less I would get a free education? Huh. My parents are not the type to work less to get stuff for free and they raised me better than that too. I know that Ivy Leagues give enough financial aid so that families earning less that $160,000 a year pay no more than 10% of their incomes for an education, but even they only give free rides to those making less than $40,000 a year. The $70,000 a year seems a little high. —hankim

The cost of living varies significantly throughout the country, and is among the highest in the Bay Area, where UC Davis draws the majority of its students from. $70,000 here is very different from $70,000 in many other parts of the country. —IDoNotExist

2009-11-25 10:14:18   "The California legislature has been paying a smaller and smaller percentage for higher education over time while the working-class has had to foot the bill."

This statement seems a little misleading because it makes it seem like nobody else pays if California decides to pay more for education when in fact taxpayers are footing the bill. Basically the same people will be paying if the state pays a larger amount, except the costs will be more hidden. Also, if by working-class you mean someone below the socio-economic middle class, that does not make sense as well because those people receive aid. The ones who have the most trouble footing the bill are those in the middle class earning under $100,000 a year, who will be the ones taking a significant hit. —hankim

It's not the same people footing the bill. That'd only be the case if income and other taxable assets were uniform, which they aren't. —PhilipNeustrom

2009-11-29 10:29:28   It would be really interesting to see how the state budget for higher education compares against the state budget for the Dept of Corrections over the last 20 years. I don't have time to do the research, but if that showed a disproportionate increase in spending for prisoners over students, that would be good ammunition for the argument. Any one have time to find and chart those numbers? —Chuckles

2009-11-29 15:31:46   So from the 2000/01 budget to the 2009/10 budget http://www.ebudget.ca.gov/Enacted/agencies.html (General fund numbers, since that is what the chart is using) There has been an 11.7% increase in spending for higher education (less than inflation?) as compared to a 57.7% increase in spending on criminals over the same period. I would call that disproportionate and worthy of bringing to the attention of our elected officials who must think that criminals are a better investment than educated, productive members of society. —Chuckles

2010-03-04 23:21:44   I'm starting a counter-protest movement to (peacefully) combat and speak out against these irrational wacko protesters. I've tentatively named the movement "the UC Loyalists" but it could be changed if anybody thinks of a better name. E-mail me at [email protected] —JamesChalmers