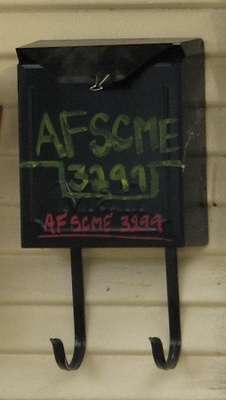 AFSCME is a union; the American Federation of State, County and Municipal Employees. The local union is AFSCME 3299. AFSCME is typically pronounced something like "Ask Me". There are many members in Davis, as employees of UC Davis are considered State employees.

In the spring of 2007, the campaign to make Sodexho food service workers, which had been attempted 3 years prior, was rejuvenated. The campaign is led by workers, AFSCME, Students Organizing for Change, and has the support of numerous other individuals and groups. If it is successful, the union would collect 1.5% of 500 food workers pay monthly even if they don't join. This works out to about $17,500 per month or $210,000 per year in addition to the money that they already were collecting from the SX and EX collective bargaining groups. At the same time, the workers would get more affordable healthcare (currently one pays 20 dollars a week to cover only themselves for Kaiser whereas under AFSCME they would pay about 2 dollars for the same plan). They would also be guaranteed higher starting salaries, paid sick leave, 15 minute breaks, a formal process for filing grievances, and union representation, among other things. Most of these things don't benefit part-time student employees very much, but the insurance for full-time employees would improve significantly.

AFSCME has been successful in getting food-service workers to become UC employees at other campuses, including UC San Diego, UC Irvine, and UC Santa Cruz. This makes UC Davis the only one out of the 10 UC campuses and 5 medical centers to contract out their food-service workers.