Berkeley can also refer to: 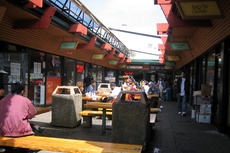 The Asian eatery enclave known to CAL students as the "Asian Ghetto". 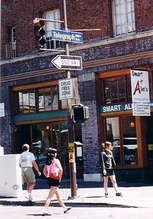 Berkeley is an interesting city to say the least. Located across the bay from San Francisco the city borders the western end of Emeryville, the northern border of Oakland and the southern border of Albany. Berkeley nonetheless embodies many of the classical characteristics of the San Francisco - San Jose Metropolitan Bay Area. From Berkeley's chilly weather and unique eateries to its political controversy and spirit of individual freedom, the city of Berkeley has come to symbolize across the United States much of what Northern California residents embrace. It is sometimes called Bezzerkley - as in berserk. The University of California at Berkeley is known for its liberalism and historic connections with the free-speech movement of the 1960s as well as the world class education available and more recently its football program. Though the famous Telegraph Avenue features countless vendors and peddlers lining the sidewalks selling wares, shirts and jewelry (just like at the Whole Earth Festival) the rest of the city's great offering of diversity and richness can go unnoticed. Berkeley's downtown is very plural in its dining and shopping and the gorgeously old fashioned College Avenue area provides great boutiques, coffee, and eating all the way to the Oakland border. While areas of the South side are impoverished and shady much of the rest of Berkeley is dominated by nice safe friendly tenants and homes that range from the normal to the stunning. Areas of interest are the luxurious area of south side proximal to the Claremont Hotel and Tunnel Road and nearly the entire north side of Berkeley extending from Euclid street down to Shattuck and upwards in to the hills. Places of interest are numerous but highly recommended (and off the beaten path of the University and the Telegraph & Bancroft area) are the Claremont Hotel in the South Side (it's the huge white building with a tower that is visible from the bay), the Star Market (a depression era market still in its original form) on Claremont Avenue and The Uplands, Espresso Roma on College and Ashby Avenue, the Berkeley Rose Garden on Euclid Avenue, and the world famous Top Dog on Durant Avenue.

The campus and city often coexist peacefully, however the two have been known to sometimes not get along.

In what many Berkeleyans would consider a pejorative sense, Berkeley can be used as an adjective. For instance, that’s totally Berkeley (in reference to an action). Or if you're taking aim at students at the UC, you could say that he talks Berkeleyish (citing a person’s use of lofty vocabulary). However, many former residents of Berkeley will tell you that the secret code word for anybody who has ever lived in Berkeley is "hella." As in, Question: "How many blankets is that homeless man wearing at People's Park?" Answer: "Hella!"