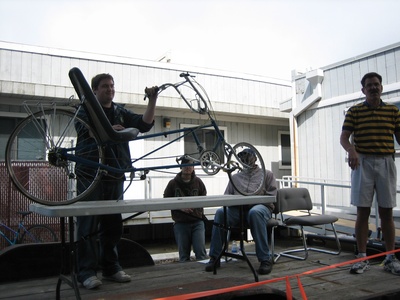 Twice a year, usually mid-October and early May, TAPS auctions off abandoned bicycles found on campus. They sell hundreds of bikes which are usually in some state of disrepair. However, for the brave souls willing to put a little bit of money into fixing up a bike, the Bike Auction is a great place to start. The cheapest bikes can be found towards the latter half of the auction, when the caffeine begins to wear off and the bidders are less excitable. Prices tend to range from $20 to $80. Newcomers complain that prices are too high, as they expect real bargains.

"The trouble with auctions is that the buyers pay too much and the sellers get too little." -Anonymous

The viewing period is heavily congested time with a lot of people in a small space. It is best to either show up early or towards the end to avoid the line. Bidders must sign-in initially to get a bid card. The sign-in table is near the auction area. It takes roughly one hour to auction off 100 bikes. Towards the end, most people are gone and this is the best value for the bidder. On top of that, TAPS does not seem to arrange the bikes in any order, so a decent bike can be #1 or #400. It is also a good idea to get a seat early. Waiting till the end of the viewing period will guarantee you standing room if you are lucky and the auctioneer only looks toward the front for bid cards.

Most bikes are mountain bikes and maybe some commuter bikes. There are only a handful of road bikes. Sometimes, there are some high-end brands like Giant or Peugeot but don't expect to get a deal. Most bidders are uninformed and tend to bid more than the real value for these bikes. They only see the brand and not anything else.

The first bicycle auctions occurred when Emil Mrak was Chancellor. He set aside the profits for the Cal Aggie Camp, but that grant was revoked some 30 years later. Currently, the money probably goes to Cliff Contreras' pockets. 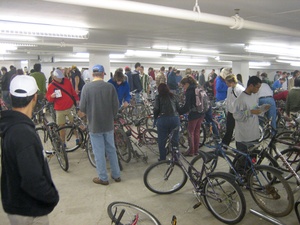 Bikes are stored under the West Entry Parking Structure. You can go review them an hour or so before the auction to see what you'd like to bid on.

The Spring 2012 bike auction will be held on Saturday, May 5th.

Description of the Spring 2006 auction:

The auctioning started at precisely 9:09 am after an initial viewing period from 8:00-9:00 am. Bikes (or in some cases, bike frames) started at a base price of either $5 or $10, and went up (or down, if nobody bid) from there. The lowest price any bike sold for was $1. The highest price paid was about $190. Most bikes were in need of serious repair, but a select few (the $190) were in excellent condition. A toddler's bike was sold, as well as a vintage recumbent. A BMX bike sold for $10. Most bikes purchased from the auction had decent frames, rusted gears, chains and brakes, and often had select parts missing.

#9 - an older Chinese woman and (I assume) her husband, who purchased several Roadmaster mountain bikes at an average price of $5 each.

#11 - middle-aged African American man, who apparently had hauled away a truckload of bikes from a previous TAPS auction.

#72 - young man with sunglasses, bought two bikes at $1 each, among others.

#120 - person of unknown age, wore orange beanie ... jokingly requested bike prices lowered to $2.50 when no one bid. Frequently bought bikes missing tires and seats. Most frequent bidder and winner, bought many bikes and frames at $10 or less each.

According to the bike auction website, TAPS also sells some bikes via Ebay. Their ebay URL is http://search.ebay.com/_W0QQsassZucdbike If you win one of these auctions, you only have to come pick the bike up (no delivery).

2006-04-30 11:02:46   I went to this event for the first time yesterday and I thought this was a great event. I got an older single speed bike with a basket and in good condition for $50, and my boyfriend got a 10 speed mountain bike for $35. After inflating the tires and cleaning the chains they're both like brand new bikes. Deffinatly a good thing to go to if you want a decent bike that works well but doesn't look too hot and won't tempt the theives on campus. —SydneySwartz

2007-05-09 15:49:32   Interesting. It's actually on campus now. Makes it more of an incentive to go and easier to get your purchases back to your dorm. But it really isn't worth it unless you come with a bit of luck. —TusharRawat

2008-05-05 14:26:50   I'm so bummed I missed it. My housemate got all excited yesterday and showed me the paper saying it was "this coming Saturday." Unfortunately, he was showing me last Friday's paper...I laughed at him, then we both cried... —SunjeetBaadkar

2009-10-13 10:53:53   The 2009 auction was somewhat of a mixed bag. As a first timer, I was outbid on the "good bikes" as the older people there had quite a bit more than what I was willing to spend and thus, I lost several good bikes. But what of the bikes? As you guys have already noted, don't come here expecting a brand new Bianchi - most of these were rusty POS big-box department bikes missing a piece here or there. And it was these bikes that quickly hit the high prices! Some went above and beyond the $100 mark.

What of me? I accidentally bought a $15 Magna without front brakes and a chain that snapped. Oh well, I guess the course of action will be: 1. Buy bike. 2.Visit Bike Collective for awesome parts. 3.??????? 4. Profit! (and probably donation)

Anyways, my advice to you is to maybe not go unless you really know your stuff. If you're the person who knows that the bike (points) over there is a Giant Rincon with blahblahblah hubs and blahblahblah shifters from 10' away, this is going to be good for you. You won't be paying $100 for a Target bike or getting outbid on a pristine Jamis bike by a man in a ridiculous hat (yes , I'm still bitter!) :D —HarrisonM

2011-04-27 12:42:06   In Response to SteveDavison, the better bikes you see on campus that are tagged usually have the tags taken off of them, before we pick them up. When we do happen to pick them up, the owners can usually be reached more easily since the bike is probably licensed or the owner is more willing to take the bike back or is looking for the bike. However this year (2011) we have a little bit better selection of bikes because TAPS is able to sell the crappier bikes on ebay rather than wasting time selling them at the auction. (Bike assistant at TAPS) —WilliamDiaz

2014-10-13 17:32:05   A bad experience due to overbidding and bike shop owners syphoning off bikes in need of repair. For the fall sale in 2014, around 420 bikes went on the auction truck. The entire process took four hours or so. Many younger bidders, some with their parents present, over bid on bikes in good condition, that some even paid higher price than one would pay for a new bike of the same model. Maybe the auction experience is just too exciting for them. Regular Walmart brand bicycles ($159 for new) was sold for only $30 cheaper than a new bike. What is so special about used bikes? People have to know that it cost at least $30 to tune the bikes you get from auction. - generic bikes were sold ranging from $25-$50 (beach cruiser, mountain bike, and bikes that need some repair); it is a ok deal if you just want one bike for personal use, not a good deal if you want to flip the bike and resell. You will get much better deals on craigslist. - What is with # 1, #112 and the speculator/hoarders? Do you really need that many bikes?