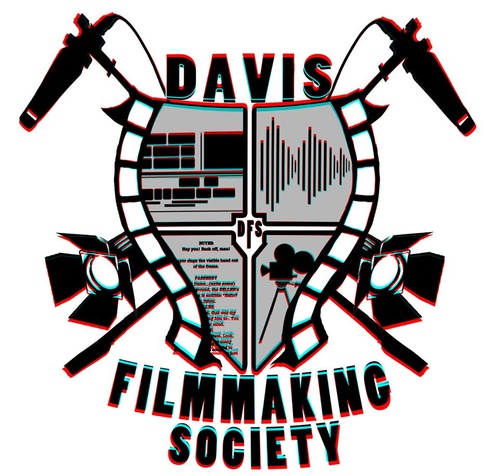 On the set of 'Deathless'

Davis Filmmaking Society (DFS) is a student club designed to foster filmmaking talent and aspiration at UC Davis. Through workshops, movie making, and sharing skills, members help each other grow as artists in the multifaceted art of film. Every form of art can be included in the process and every role is unique and pivotal to the success of a film. At DFS we value writers, producers, directors, crew, editors, and everyone else behind the camera just as much as the actor who too often get all the credit. Every talent is welcome and everyone is welcome.

Our official meetings consist of workshops, socials, and screening of DFS short films.

Recognizing that many members possess little to no filmmaking experience, DFS is committed not only to being the best social experience for filmmakers but an educational one as well. DFS seasons are designed to be "rapid-fire." Films are made fast and cheaply between classes with the express purpose of those involved with the film to learn from the process. Dealing with actors, crafting a creative vision between the writer, director, and editor. All critical skills of the film industry.

On the set of 'The Hall Monitor'

The structure of DFS is designed with rapid-fire filmmaking in mind. Recognizing the financial and logistical limitations of low-budget filmmaking, each quarter of UC Davis is divided into 2-3 seasons. A season is simply two to three weeks for the production of a set of short films. Each season has its own theme or limitations; one season may include horror films, while the next might impose certain limitations or parameters on the script or filmmaking process such as a movie with just one actor. At the start of each season, DFS performs a census of the club, recording each member onto a ledger along with their preferred role. Individuals can mark themselves as directors, writers, actors, or producers, and the officers of the club organize every member into the different groups of the season.

It is the responsibility of each group to create their film by the season deadline. The end of each season culminates with a screening of each completed film.

Between each season screening, DFS holds educational workshops about filmmaking techniques and socials to give a chance for every member to meet.

In addition to season episodes, DFS also produces a larger-scale, quarter-long production. A script contest is held to decide the script for the next quarter production. Anyone, including non-members, can audition for cast and crew positions. These short films premiere at the end of the quarter.

Membership is not required to attend socials, workshops, screenings, or general meetings.

There is no membership fee so just show up and participate and you're in!

The Marketing Department was started by Michael Wheelock in November of 2014 to help raise money for DFS, provide services outside of the club, and to help promote DFS as an up and coming on-campus organization. The department's members go through a selective hiring process so quality work is ensured.

Please e-mail us if you have any business inquiries or any additional information about our services.

Long ago in time, where even today's seniors were but the twinkle in the glistening ink of college applications, there was a club on campus called Filmmakers' Ambitions. For whatever reasons, the club dissolved, and a single member of that fine institution was left to recall it. His name was Asa Daniel Fullwood, and he was resolved to see a filmmaking club on campus once again. For nearly 3 years, Davis was dead, cinematographically speaking, until Daniel met with Kiko Romero and Alex Yeghiazarian and began to talk in earnest of reviving the club. Soon enough, the paperwork was filed and the Davis Filmmaking Society was officially registered until a chance e-mail from a freshman.

There had already been a film club for 4 months, one entirely comprised of freshmen. Dubbing themselves CineagAddgies, the freshman film group agreed to merge with the seniors, strengthening DFS and adding the talents of Alex Lee, Martin Yao, Annie Nguyen, and Kaitlyn Griggs.

Season 8 Minute to Win It

In honor of our first executive producer, Asa Daniel Fullwood, the first ever DFS Awards Night was named the Fullwoods. Awards were given for the Best Director, Best Film, Best Editing, Best Screenplay, Best Actor, and Most Valued Crewmember based on one DFS short film from seasons one to three. Additional awards were also given including Best Chemistry. The Best Film of 2014 was awarded to The Hall Monitor.