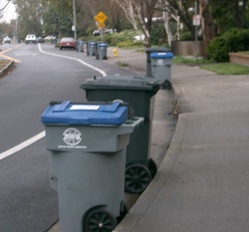 On April 20, 2018, Recology took over recycling and waste management services for Davis. Though Davis Waste Removal had a contract with the city until 2027, the city had the right to end the deal if Davis Waste Removal was sold to new owners. The city approved the sale to Recology because Recology also focuses on being green and pursuing "zero waste".

In November of 2004 the town was a-twitter with the distribution of new garbage cans and recycling cans. Now you can see them all over town, on garbage pick-up day. No more unsightly, unmatched garbage cans provided by Davis Waste Removal. Now, unsightly, matched garbage cans. StevenDaubert speculates that maybe it was cheaper to buy everyone in town a new trash can and recycle bin plus a brand new fleet than it was to pay the workers comps on the guys who used to drive and had to heft each can into the truck. Under Davis Municipal Code section 32.01.050, garbage and recycling bins need to be put out between 5pm the night before pickup and 6am the day of, and they must be taken from the curb no later than 7am the day after pickup. 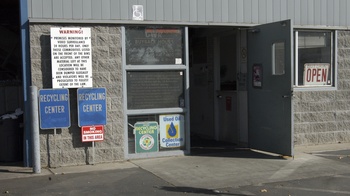 You can take your plastic bottles and aluminum cans to the DWR buyback center listed above and redeem the CRV. CRV redemption is 5 cents for aluminum cans and bottles under 24oz. and 10 cents for bottles 24oz. and above refund per container. Normally they are weighed, but if you have 50 items or fewer you can request that they be counted instead of weighed. The CRV is set so that there is little benefit to counting. The amount paid by weight is set by the State of California, not by the recycling centers; the centers are reimbursed for the items collected which is why they require you to sign the check they give you.

Up to 2 ml can cling to the sides of a water bottle, adding 2 grams.

Davis Waste Removal has recycling drop-boxes available for people to bring their recycling 24/7. There are separate drop boxes to recycle these items:

Unlike the Yolo County Central Landfill, they used to be happy when you took scrap from them. This supported constructions of many bicycle-contraptions. To encourage such behavior, they might or might not still hold days when they'll leave stuff out in front and you can go and choose whatever you like. But be sure to follow the rules as posted on the signs. This is what the sign used to say: 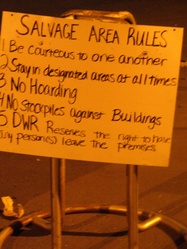 In 2011 DWR put up a sign at their scrap steel collection bins saying that they will prosecute scavengers. 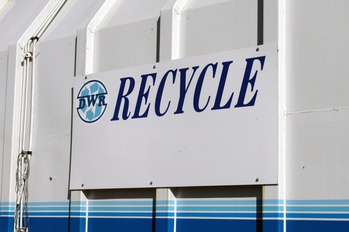 DWR has started up a Commercial Food Scrap Pilot Program (enrollment in the pilot program ended April 28, 2011) for composting food, soiled paper, and related waste from businesses. They also accept used motor oil and oil filters for recycling. DWR also picks up green waste. Trash is taken to the Yolo County Central Landfill. Plus, they sponsor the Davis Bike Club.

For more information about what items DWR accepts for recycling, check out the City of Davis Recycling Website. You can also find information there about their Bulky Items Drop-Off Days.

2008-11-25 20:57:45   If you live in Davis, this is a great service to be able to recycle your own items by dropping them off for free. If you are moving out, come by this location and get some boxes for free. Believe me, since moving back to my hometown in Southern California, I truly miss this place and this service. Yay for do-it-yourself hassle-free recycling!! —BenjaminCatabas

2009-05-22 15:46:54   today, we only filled up a trash can and 1/4 worth of plastic bottles. my cynical room mate thought i was going to only get two dollars for it, but in the end, i got a hefty 7 dollars. mind you this is only a can and a quarter full of bottles, thats easily a weeks worth if you live with soda drinkers and people who dont trust davis' water. —chand3123k

2010-02-25 17:07:03   Davis water is of higher quality than bottled water...I think its hilarious that people pay for something, that is almost free, because they think its "better" when its actually worse. —jdyeah

I brought in one big black garbage bag full of crushed cans, a smaller white bag and about 7 grocery bags full of uncrushed cans which weighed about 50 pounds total. I got a total of $77.47. Their price of aluminum is $1.54/lb as of July 2009. -brookeb

Per Davis Municipal Code 32.01.050, for individually serviced residences (i.e. most houses), "Emptied containers shall be removed from the curb by seven a.m. on the day following collection." —TomGarberson

Interesting. I wonder how early you can put them out. Our neighbor has decided to claim parking spaces with them. —MikeyCrews

From the same code section: "Such placement shall occur no earlier than 5:00 p.m. on the day prior to the scheduled collection day, nor later than 6:00 a.m. on collection day." —tg

Interesting again. Part of me thinks I should go inform him about the city code ( since he's been kind enough to inform me about other city codes). But part of me thinks it might be best to just try and let go of this petty dispute. —MikeyCrews

2011-10-19 17:43:50   I moved here (from Sacramento) in April and I'd like to know if it's legal to leave old couches, etc. on the curb. (When the students moved out they were everywhere.) Also, what about old fencing and other construction material? Again, I've seen quite a bit of it. —ScottSchiller