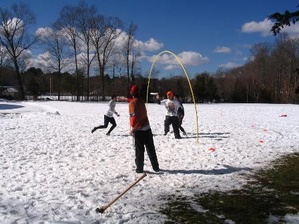 Goaltimate is a wonderful sport - it is a bit like Ultimate Frisbee, but far better. Ben originally brought Goaltimate to Davis from San Diego and he can still be spotted under the PVC hoop at various parks around town. The exact rules are not always the same (Ben sometimes changes them), but it's like playing half-court Ultimate. Goals must be caught in the half circle zone after going through the arch; Stall counts are five, not ten; and the game keeps going after a score but the disc must be reset past the clear line before another score is attempted after a score or a change of possession. The playing time or the playing location totally consistent, but the games are typically Saturday or Sunday morning at Arroyo Park in West Davis, when called on the list and enough players commit. People interested in the game can join the mailing list to find local locations and times.

Many ultimate players play goaltimate over the winter, so it can be a good way to meet local players of both sports.