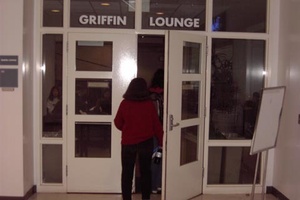 The entryway to the lounge.

Starting March 23, 2015, the departments of Campus Recreation and Unions (CRU) and Design and Construction Management (DCM) will begin the Memorial Union Renewal. This comprehensive renovation will make the historic Memorial Union a more dynamic environment and integral on-campus destination for students and others in the UC Davis community. The project will maintain the integrity of the Memorial Union as a historic facility, reinforcing its importance to the campus. In addition, a number of critical and strategic improvements will meet the needs of a growing student population and enhance the student experience. The Memorial Union Renewal includes the following improvements:

You can find information for the project at the Campus Recreation and Unions Website or their Facebook Page.

The Memorial Union Is:

Supported by grants from the Regents and by contributions from students, alumni, and friends, the first portion was completed in October, 1955. An addition, completed in November, 1961, promises that this memorial will grow as the years pass.

They shall not grow old as we that are left to grow old.
Age shall not weary them nor the years condemn.
At the going down of the sun and in the morning
We shall remember them. -- Binyon

Griffin Lounge is an armed forces memorial and study spot inside of the MU (located right after the grill area of the CoHo). The lounge, as well as the entire Memorial Union, serves as a memorial to all UC Davis alumni who have died protecting freedom in the line of duty. Inside the lounge there is a monument inscribed with names of 134 (135 after re dedication in September of 2008, adding US Army Maj. Mark Taylor) Aggies that have given their lives defending the United States. The monument was erected to assure the fallen that their sacrifice will never be forgotten. The Scabbard and Blade Society of UC Davis is currently accepting donations to renovate the lounge and make the inscriptions of the honored more visible to passers by. The primary fund raising event held annually is the Griffin Lounge Memorial Run; it is a fun and rewarding experience that offers both 5k and 10k races to those of all athletic ability.

Griffin Lounge is a really comfortable and quiet place to study. It's almost always completely silent and there's usually room to sit someplace to study. The lights are somewhat dim and there's a bunch of comfy chairs and couch type things. This is primarily the reason why Griffin Lounge is, without a doubt, the place where everybody decides to take a nap. If you go in there in the middle of the week during the afternoon, you see hordes of students passed out. There's a fireplace on one end of the lounge that is sometimes lit. Visor Lady can often be seen here. It's like Jonestown, but with wireless internet.

The Lounge will serve as a memorial space and rest area after renovation, and may go by a new name.

Griffin Lounge in the late afternoon.