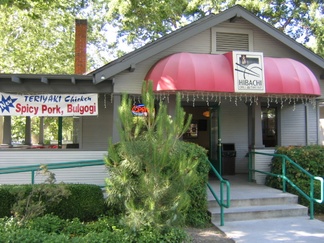 Hibachi Grill and Take Out was a Japanese and Korean restaurant which featured teriyaki, spicy pork, and bulgogi. They also served Korean BBQ. Do not confuse them with Hibachi-San.

2005-07-06 07:05:40 This place offers simple, tasty rice bowls, Chinese chicken salad and even smoothies. They have sushi, but it can be a little funky. I'd avoid it, and go for the good old chicken teriyaki bowl. —SiennaGrass

2006-03-19 18:08:47   The owner is one of the nicest owners I've ever met. He makes friends with all his clients. I highly reccommend the spicy pork. Spicy Pork bowls, while not on the menu, are also available if you ask for it. Their shakes are also superb. —KevinRollins

2006-05-16 09:00:51   The only thing I've ever tried on the menu is the Chicken Tariyaki rice bowl, but it's always been great. I never liked teriyaki very much until I tried Hibachi's. Lately, I've been going here for lunch several times a month. —AdamSchneider

2006-07-10 14:36:30   This place is a little gem. So far, the restaurant is *immaculately* clean and the food ingredients seem fresh, and the dishes are tasty. (I've had the chicken teriyaki and the hibap). I concur with previous comments: the owner IS very nice. According to him, the place has been open since about January 2006. Check it out. —AnnieSirrah

2007-09-09 13:26:32   It looks like it's being replaced by Burgers and Brew owned and operated by Crepeville (or so the sign on the front says). Wonder how this will compete with the new 3rd & U Cafe seems like the same kinda food is going to be offered at both locations. —ArmyDecoy