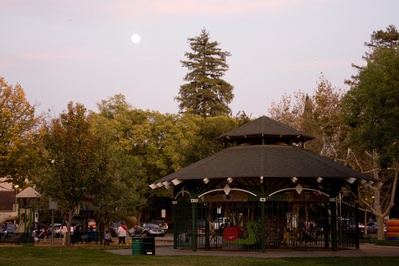 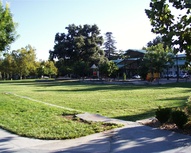 Students gather here twice per year to compete to see who knows how to write a 20 page paper in one day.

The fountains at night. These are located on the southern end of the park.

Central Park is located Downtown between B and C Streets, and is bounded by 3rd and 5th Streets on the south and north, respectively. It has an adjacent parking lot. The southwest corner is home to the US Bicycling Hall of Fame. The northeast corner houses the Hattie Weber Museum and the public restroom facility known as the WPA Building. The Central Park is also home to an old Lincoln Highway marker.

The park is home to a human-powered carousel, which was added on September 7th 1995. One person pedals the thing and others ride.

The performance deck is used for a multitude of Farmers Market shows throughout the year.

The park was originally known as Davis City Park. It was created in 1937, with roughly two-thirds of the expenses being covered by the WPA. The city paid for the rest.

The park was expanded in 1986 after the successful passage of Measure S. Prior to this, the southern half of the park actually used to be an empty lot for years (it was formerly the site of Davis' first elementary school). During those days, in the early years of the Whole Earth Festival, actual hippies used to park their VW campers there over the WEF weekend. It was also the starting point for the DHS Homecoming parade for many years. The empty lot was known for years as "The Arden-Mayfair lot" because at one time there was going to be an Arden-Mayfair built on it. It took building Third & B and the Farmer's Market to finally get people out of the habit of referring to it as the Arden Mayfair lot! Now the most common nickname for the park is the Farmers' Market, as there's a large shelter there for the market to take place under.

WiFi was added to the park in April of 2006 (Instaconnect). To use the service, one must fill out an electronic form to get a username. 24-hour guest access is free while fee-based packages are offered to more regular users.

Beginning in the spring of 2006, volunteers have begun a renovation of the gardens in Central Park. This renovation has transformed the space into beautiful flower gardens, demonstration gardens, gardens showcasing sustainable horticultural practices, and a place for children's activities and family-oriented programs. To find out more information, volunteer, or donate, visit the Central Park Gardens website.

In December 2011, Davis Voice published a summary of upcoming renovations. 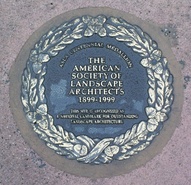 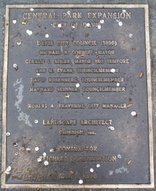 Dedication plaque for expansion of park, located near tree bench

Also see Parks for info. on other local parks or consult the comprehensive info for Davis parks, Maps

2005-11-20 00:14:59   Does anyone know about the majestic Old Oak Tree surrounded by the deck structure at 'C' & 4th Streets? Was it purposefully planted? or did it simply volunteer its presence, perhaps to the creation of the Park? Any estimates on how old it is? When was the surrounding deck built? That Old Oak Tree has great Ch'i (Qi)! —DanielQuincy

2010-09-11 13:52:39   A lot across B St from the park (pretty much directly across from the garden) has a construction sign labeled "Central Park West." Anyone have more info? —BillKendrick

2011-08-04 15:49:53   Central Park used to be just the 5th to 4th, B to C portion... a one block park (as indicated by the plaque above). Used to be the other part was just gravel... it's where the Boy Scouts used to sell Christmas trees, various cheesy carnivals would come through (similar to what you might find in a miniaturized county fair), and home to various flea markets and such. It was nice when they expanded, made it so kids could run around comfortably, and Farmer's Market had a comfortable home. The tree was one of the few "green spots" across 4th street, if memory serves. —OldDavis73