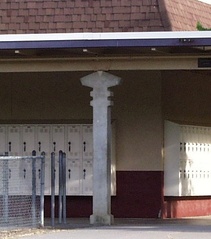 Holmes Junior High School is one of our local schools, and it was named in honor of Oliver Wendell Holmes, Jr.. Over the years Holmes has been home to some great teachers including Pierre Neu, Larry Turner and Al Klinger. The campus opened in 1966. In addition to other classrooms, the library, and gym there are also metal and wood shops, though the school has dramatically cut back on it's shop classes.

The Gym and basketball courts The fields on the west side of the campus are great for softball, soccer, or jogging. There used to be a parcourse along the west and south sides of the field, but very little is left of the original 20+ station course.

Just North of the track is a Evergreen grove dedicated to Andrew Mockus who died tragically. On the night of April 24, 1992, 14-year-old Andrew Mockus was brutally beaten and robbed of $2 by three other teens, then pushed into the side of a moving freight train and killed. The incident occurred in a gully near UC Davis.

Jeff Bryant is the current Master Teacher of Snarkiness and Pranks. 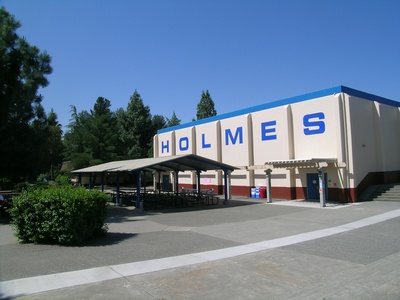 The Holmes mascot is a red star, with the collective name for Holmes teams and students being "The Patriot(s)". Previously (prior to 2002), the mascot was "The Minuteman(men)", but the mascot was changed so as to be gender-neutral. The school colors are black and light blue (although this is debateable, as roughly five other color combinations are used, depending on who you ask).

Nick recalls something about there being a bulldog mascot.

They voted for the change in mascots about 2002-'03. Mason was in roughly 8th grade and remembers that it was vaguely related to 9-11 and wanting to seem more "patriotic," and may have had something to do with all the press about pit bulls attacking people.