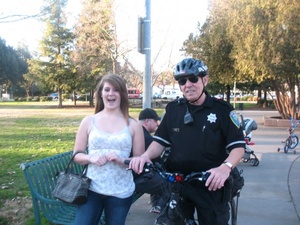 Officer John Neves was a Davis Police officer who usually was found downtown on a bike. After retiring from the police department, he worked as a part-time officer. It was not good idea to argue with him, as he was chock full of one / two liners that would make you feel like a moron. But he was a good guy, and had your best interest and safety at heart. During the crush of new students each fall, he worked extended hours and flagged down people by the group as they wantonly committed moving violations on their bikes.

On the morning of November 18th, 2014, Officer Neves passed away due to complications from Hamman-Rich Syndrome, a rare, somewhat mysterious lung disease. He passed peacefully with his family present after being hospitalized three weeks prior. John will be missed by his Police Department family, as well by the community he served so long and so well.

2009-08-12 08:35:50   He did tell a story about a girl he pulled over for running a stop sign. When asked if she knew why he pulled her over, she responded "Because you're an asshole!" Needless to say, she received a ticket instead of his usual warning. I love Officer Neves. —BrettHall

2010-03-15 23:36:39   Officer Neves is one of the nicest people you can meet in town. I've had numerous conversations with him and seen him in action many times downtown. One incident that stands out for me is the time a man was stopped on his 10-speed for running the stop sign at 3rd and F. He began to yell and argue but Officer Neves just calmly looked at him and said "I'm trying to help you not get a ticket here, you want continue to stop me from doing that or just try to listen for a second?" After that the man calmed down, listened and went away no harm and no foul. How many officers you know that would do that? —WesOne

2010-07-10 18:15:31   Neves is wonderful. I was homeless here for about a year and he never harassed me. (Though I don't drink or do stupid things in public, so maybe that's why, but I did hang out with the stupid hobos.) He's never pulled me over for anything, knowing I was homeless. Most cops do BECAUSE you don't have a place to live. Also, I was having trouble finding Mobile Connections a few months back and he pointed me in the right direction. (I was a block across on the same street, bad vision ftl.) —Mogitha

2011-01-20 18:27:46   Although Mr. Neves may seem nice some of the time he really doesn't have your best interest at heart. Not only have i been stopped by him for such moving violations as following a car through a stop sign on my bike, riding without a helmet the day before my 18th birthday, or simply sitting on my bike on the sidewalk, I have also witnessed, on numerous occasions the blatant idiocy he calls police work. Just because you know a rule doesn't mean you should tell it to every person in every single situation. This man is a generalizer, and if you do something safe that he can tell you a rule to counter, than he wins. I'll agree, there is no arguing with this man, he's too old and too stubborn to listen to anyone he pulls over. Tickets should be written to people who either don't understand or threaten both public and/or individual safety. Following a car through a stop sign doesn't endanger anyone if you are a compotent, receptive person looking to see what that particular situation entails. Although, he will give you a ticket every time because you didn't stop. Even though it wastes everyone's time at the intersection to do so. I understand rules. However, i also understand a thing or two about discretion and when things are situationally appropriate. Context doesn't matter to Neves...if there is a rule that he can tell you, he most certainly will. Not even to mention the fact that he is very condescending and patronizing. Please retire fully, and stop harassing people that have lived here longer than you have. —LukeSlotton

2011-07-07 14:07:17   John is probably the REALEST cop in Davis. He's the only one i feel comfortable calling him a Peace Officer. All what it takes to be on his good side is respect. It is his job to enforce laws, he is a real cop after all, as it is Officer Talavera's job to harass and distort laws. —JustinYoder