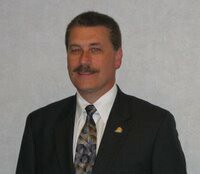 Landy Black became the 10th police chief in Davis in April 2007. He was preceded by Jim Hyde and currently holds the position. Relocating from Seattle, Washington, Chief Black is settling in to the job as head of the Davis Police Department. Black was a precinct captain in an extremely diverse part of Seattle, that encompassed Capitol Hill—multicultural and eclectic. Mr. Black had been with the Seattle Police Department since January 1983. He most recently oversaw 130 sworn and 5 non-sworn employees and a budget of $17.2 million. There were approximately 100,000 residents within his precinct. As of 2011 the state comptroller office reports that he is the highest paid Davis city employee (hey, somebody has to be) at $179,640 per year, with a total retirement and health cost of $60,749.

“Landy Black has the right combination of skills, knowledge and work experience to successfully lead the Davis Police Department and to work effectively with the community on policing issues. I look forward to him being a part of our team,” said City Manager Bill Emlen in the city's press release. “Landy Black has a record of problem-solving, including working to unite the East District and increase the department’s public approval rating in that precinct.”

“I look forward to the challenges and opportunities that the position of Davis Police Chief presents. I am eager to become a member of the community and ensure that Davis remains a great place to live and work,” said Landy Black.