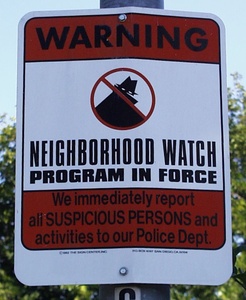 Neighborhood Watch is neighbors watching out for one another. Some neighborhoods choose to have meetings and post signs. The signs tell anyone with malicious intent that they will probably be watched and police called. Neighborhood watch programs are facilitated by the Davis Police Department.

Neighborhood watches, or "Community Policing" strikes me as rather dystopian, that the government doesn't even need to watch us, because we will TURN IN "suspicious" characters! —TobinJones