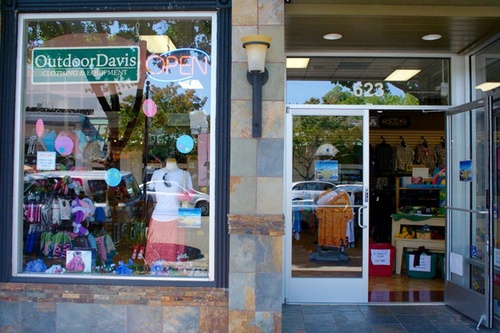 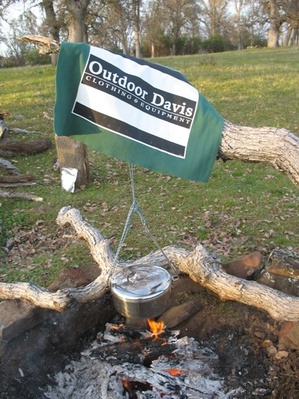 According to the Facebook page, Outdoor Davis closed at the end of August 2016 due to increased monthly costs that came with the sale of the building.

Outdoor Davis, located at the corner of Second and F Streets, is a locally owned outdoor store specializing in outdoor clothing, gear, and equipment. They also carry a large selection of travel accessories, competitive swimsuits and goggles, and GoPro cameras and accessories. Outdoor Davis carries products for every season, as well as technical and casual clothing for children, teens and adults.

Outdoor Davis is a pet freindly store and pets are welcome in the store on a leash. They also put a water bowl outside their store for any pets to drink from.

They run a coupon in the Green Machine for $5 off a purchase of $25 or more, or $10 off a purchase of $100 or more. They also offer a discount through the Yelp app on smartphones for 20% off a single item. They sell most of their products for the same price that you would find at REI, so the discounts are a great way to save some money instead of driving out to Sacramento.

Prior to their current location, they were located at 232 E Street (in E Street Plaza).

This location was previously home to Samira's.

What did you think of Outdoor Davis?

2006-11-04 13:18:28   This place looks like they mostly sell tshirts. The old Alpine Supply on G Street where Volleys Tennis Shop is now was much better. —NickSchmalenberger

2006-11-16 09:51:36   Visited this place a few weeks ago, and they mostly carry children's stuff. Pretty limited selection, but consider the square footage of the place. I'll still shop in Sac for my outdoor gear, especially if I'm plunking down a chunk of change for something like a backpack, where I need to test out several models. —AlphaDog

2007-02-12 15:45:51   I was impressed. Their stock has improved in the few months since my first visit. They had seam grip and a nik wax substitute (what I was looking for) and they had go lite packs on sale %25 off. So much better than going into Sac. —RobiPochapin

2007-02-21 08:24:17   It was ok with some good stock but I found a site called http://www.upsideover.com that carried a larger selection specifically for kids. We outfitted our camp with the climbing harnesses. —StephenGilfus

2007-02-24 19:57:29   I saw something in the Aggie about this place and checked them out. I was impressed to see all the stuff they have for such a small store! The lady working there was really helpful and even offered to special order items they didn't have instock. They have a lot of clothing & camping equipment, It sure beats driving out to Sac. —MikeAdler

2008-04-13 11:45:32   It's a small store, so obviously they don't have the selection that big boxes like REI have, although they are usually happy to order stuff for you. They have always been friendly and knowledgeable with me. I have found their prices to be pretty decent on a lot of items... I got a Nalgene for $8, which is as cheap as anywhere. The thing to keep in mind is that they really only carry name-brand stuff, which seems expensive compared to Wal-Mart cheapo brand. But, in a lot of cases, you get what you pay for. —RyanCoates

2009-01-10 06:45:23   It was a good store but what made it an excellent experience was the guy who was running the shop. Clement, I think his name was. He was very helpful in letting me know exactly what I needed and wasn't just trying to shove products down my throat. Though it's a small store, they have a warehouse down 5th street with everything that's not still in stock. They had exactly what I needed and I was very satisfied :) —MattCorey

2010-01-30 14:33:52   I love the people that work here. Unfortunately their stock is limited compared to REI and such. I was looking for hiking shoes and although I didn't find what I wanted, the people were so helpful. I'll try and buy from here more often. —AlisaKim

2010-07-18 13:26:13   I went in to get a upgrade doohickey for my camelbak, they had the drinking valve cover but no insulation ( I had to buy it from kens ;__;) The lady behind the counter was super friendly, the store looked nice. I'm going to be back for my outdoor needs! —StevenDaubert

2011-09-23 14:37:35   Needed to buy some white crew socks for ROTC and saw this DavisWiki page. Upon arriving, I asked about what I needed and they had the item AND it was for sale. Not only that, but the salesman also told me about which products could also help me in my physical training. Recommended. —TiffanySun

2012-07-14 12:12:20   As others have said, the people in this store are extremely nice and willing to answer any questions you might have. There is a very nice selection of items given the size of the store, and you can't beat the convenience of having an outdoor store right in town. Plus, they are dog-friendly! —CovertProfessor

And when my friend finally decided to get himself a camelbak, he saved a couple bucks by getting it at Kens Bike & Ski instead.

Not trying to rip on the place, it's a nice store with nice people, but their prices are not very competitive. —MasonMurray

2013-02-17 17:42:05   I actually didn't find the staff all that helpful recently. Apparently they've experienced a fair amount of shoplifting and, while they say hello to everyone when you walk in, after that you're on your own. They seem indifferent to customers, mostly just sitting at the desk and chatting to each other. Most customers came in, browsed for a minute and left, a few asked for items they didn't carry, and the ones seriously looking for things were thoroughly ignored. A few questions about products such as a book were met with blank stares. Given other readers' compliments, it leaves me to wonder if maybe the weekend staff isn't the A team. I also heard the male cashier fussing to his colleague, who was ignoring about 5 customers, that Davis Wiki thinks that they only sell tee-shirts. Actually they seem to sell mostly baby clothes. —JaneBF

—Hi JaneBF, We're sorry to hear about your poor experience recently. This issue has been addressed with our staff and there will hopefully not be another incident like this. Thank you for bringing it to our attention as our customer service is something we are known for, and I like to know if there is ever an issue. Please never hesitate to contact the manager with any concerns. —OutdoorDavis

2016-08-23 17:37:35   Called and asked about shoes. I don't know if the employee thought my question was stupid or was completely stumped/surprised or what, but the tone of voice and laughing while answering was not welcoming. —linux_vegan