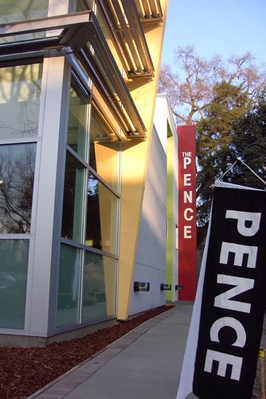 The Pence Art Gallery is one of the top two art galleries in Davis. The old building was torn down and replaced by a major new art building (designed as an art gallery) which reopened in February of 2005. It has two large galleries on ground level and a medium-sized gallery/educational room upstairs. They also have a gift shop with wonderful items, conference room, a kitchen, and other spaces that are available for rent. They are a major participant in the monthly ArtAbout art walk.

Their focus is showcasing exemplary art by local and regional artists, in both single artist and thematic shows. Local artists are invited to participate in their annual November "Community Hang-Up" exhibit (a non-juried show), and to apply for juried shows. Education is also a major priority, and they have a drop-in art workshop series (4th Saturday of every month, 1-3 PM) for families, art workshops for adults such as The Davis Figure Drawing Group, lectures, and an amazing program for school groups called ArtSmart. Fees are low: $2-$4 per child.

The Pence is a nonprofit, tax-exempt corporation primarily supported by memberships, an annual Art Auction and Garden Tour, and private gifts.

I'd encourage everyone to stop by this place, especially since it's just been remodeled. — CristinaDeptula

"2014-04-28 18:14:23"   The "Pence Garden Tour" sign is placed so disrespectfully close as to overshadow Ellie Gerhardy's cross/memorial on the northwest corner of Pole Line Road and Covell Boulevard. I would have thought art gallery personnel would have been respectfully aware of the composition of that particular space. Non-profit commercialism and honoring the dead are two distinct uses of a space and must be clearly distinguished.

"Ellie" Gerhardy (April 14, 1976 – July 16, 1997) was killed while riding her bicycle south on Pole Line Road in East Davis, crossing Covell Boulevard at a green light. She was a 21 year-old UC Davis senior, studying Nutritional Science, and was to be the co-captain of the UC Davis swimming team for the 1997-98 season. A wooden-cross memorial to Ellie has been present at the northwest corner of Covell and Pole Line since 1998. — BrianKenyon

"'Medusa's Mirror Image," by Benbow Bullock, 1996. This sculpture is in the courtyard behind the gallery. 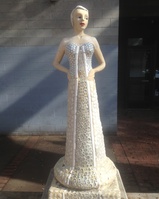