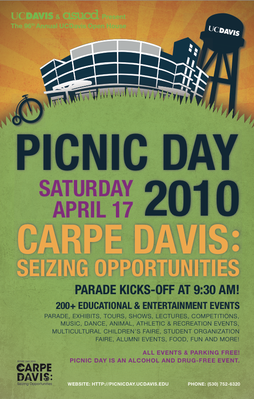 The schedule of events is now available! http://picnicday.ucdavis.edu/sites/default/files/PicnicDay2010_SOE_color_0.pdf

All the events start at NOON on the Quad! Be sure to join in on the festivities to be eligible to win fantastic prizes from our donors! Some prizes include gift cards to Davis Creamery, cupcakes from Cupcake Craving, Sacramento Rivercats tickets, and much much more!

Be sure to spread the word! We want to see as many of you guys out there!

Event Favorites: Crowd pleasers such as the ever-popular Doxie Derby and Liquid Nitrogen Ice Cream Exhibit will be returning once again, as well as a profusion of new events. For the annual parade, which will kick off Picnic Day at 9:30 am, will be led by Parade Marshals Tom and Meg Stallard of Woodland, who served together on the Picnic Day Board of directors in 1968.

Entertainment Highlights: Entertainment at Picnic Day 2010 will have a total of five stages and will feature two main stages where performers will be playing back-to-back sets, creating a continuous live performance. The campus' favorite a'cappella groups will be on every stage: the Liquid Hotplates, the [Lounge Lizards], the Afterglow, and the Spokes. Salsa, merengue, and cha-cha dances with vocals will be performed in Spanish by members from Puerto Rico, Panama, Nicaragua, Mexico, and Cuba.

Multicultural Children’s Faire 2010 - Uncovering a World of Opportunities: This annual favorite aims to provide a family friendly environment geared towards encouraging children to explore science and culture through interactive mediums such as arts and crafts. Activities are inspired from traditions all around the globe: Exploring the Senses with the Children’s Thinking Lab, Face Painting and Craft Fun with the Memory and Development Lab, Ancient Greek Pottery (Tiny-Tot Friendly), Indian Rangoli, African Bead Necklace, and Passport to Adventure (Tiny-Tot Friendly), Make Your Own Play Dough, Peruvian Weaving, MCF Mural (Tiny-Tot Friendly) 10:30am to 4pm Hart Hall Courtyard, and many more!

For Animal Lovers: Fly Ball Racing Demo 9:30am Hutchison Field, a fast paced dog sport where dogs chase a ball over hurdles; Luv-A-Bull: Pit Bull Kissing Both 10am Hutchison field, an opportunity to learn about the lovable breed and take photos with the dogs; Vet Teaching Hospital Open House 12pm Veterinary Medicine Teaching Hospital, a great opportunity to see the teaching hospital first hand; numerous Animal Rescue Groups 9am East field (aka Dutton), which features 25+ animal/pet rescue groups; an Animal Science Event at Meyer Hall and Cole Facilities, an opportunity to learn about the department, major, and all the animals on campus.

Exhibits: General exhibits include the Language and Literature Department’s Speed Dating, Tour of the new Student Health Services Center. Non-Profit exhibits include the Bent Star Project on the East Lawn of Hart Hall, to learn how the organization is supporting our troops and finding those who are missing in action.

Volunteers To be a volunteer please contact our Volunteer Director, Laureen Cruz at [email protected] . 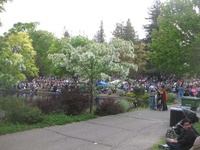 Battle of the Bands in the Arboretum. 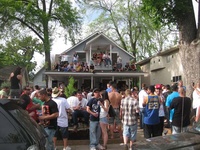 2010-04-20 22:21:28   "City of Davis Police Department resources were stretched thin during the UC Davis Picnic Day weekend... Officers made 33 arrests and responded to 516 calls for service. For comparison, the number of arrests made during previous Picnic Day weekends averages 15 and during a typical weekend in Davis officers respond to about 100 calls for service." (Woodland Record) —daviself

2010-04-21 21:08:30   I saw police cars all over the place, including at least one unmarked car (and a vehicle ahead of it which did not pull over even though the car had lights and sirens on!) —IDoNotExist

2010-04-22 11:43:32   Serious trouble went on. Someone threw a rock through my manager's window and broke an antique picture frame. There was also a fight next door and I'm sure someone got hurt. —MasonMurray

"It wasn't pleasant" would be like saying that Michelangelo's David is just a statue: understatement of the year. I feel for everyone else who had to work that day, too. —AlexanderHo

2010-04-23 17:26:02   I feel that the two largest problems of the day were these: 1) The lazy attitude of the bouncers at many bars allowing many intoxicated people into their establishments when they should not have. Part fo thsi is greed, part of this is just an inability to differentiate between drunk and buzzed patrons. This can be easily controlled. Part of this was also the foolish bars who allowed 6am drinking deals such as the Graduate with their 1st Thousand for a dollar Beer deal. Why do you think it is a good thing to get people hammered right at the beginning of the day?

2) The public/private drinking sponsored in large part by the Frats and Sororities. This is the most difficult to regulate and relies entirely upon personal responsibility.

I was bouncing that day at Little Prague. We had a zero tolerance policy for allowing anyone who seemed overly intoxicated from entering and handled any issues that occurred within the establishment in a timely and respectful manner. No serious issues, no fights, no bad feelings on the part of the patrons, even when they had to take a field sobriety test to get through the door (in some cases). Most who failed the simple test laughed and said "Yeah, I probably had too much" and left with no hard feelings.

It is the responsibility of everyone to recognize and understand when people cannot control themselves. —WesOne

2010-05-20 10:53:14   Things definitely need to be re-thought next year if UC Davis students hope to keep Picnic Day around. I had to work that night and E Street was insane. Most of the people who came into the store where I worked were drunk, belligerent, and rude. Families who were unfortunate enough to bring their small children in were clearly annoyed and upset with the environment and I had to clean puke off one of our tables. Ridiculous. —AdamV