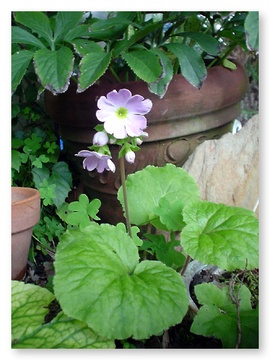 Primroses (Primulaceae sp) form a large genus with a well-deserved reputation as aristocrat of the shade garden. They are mostly hardy perennial herbs and are natives of Europe and temperate Asia, Java and North America; only one kind, P. magellanica, is found south of the equator, in southern South America. Some primroses, such as the English Primrose, bear their flowers singly on stems that rise straight from the base of the plant while others produce their clusters of flowers in a head or umbel at the top of the flower stem.

Most species need moist, rich soil, and want a cool location with light shade. The summers are too hot over most of the US for growing many primroses, and survival in areas with very hot summers like we have in Davis probably depends largely on picking the right microclimate along with selection of a hardy variety. Hardy primulas can be grown here successfully if watered generously in dry weather and given a soil so rich in humus or vegetable matter it acts like a sponge; large quantities of leaf mold, cow manure, peat or sphagnum moss should be mixed into the soil. Our Davis climate results in some winter and early spring blooms with plants sometimes struggling through the summers. Primulas can be propagated by division in early spring or fall.