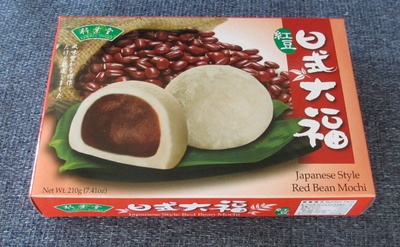 Daifuku, purchased at The Inconvenient Store

Red Bean Paste is a sweetened, mashed food item made from azuki beans. The paste is often used as a stuffing for pastries in East Asian cuisines.

One type of red bean treat found in Davis is dorayaki, which is a circular sponge cake filled with the paste. It can be found at The Inconvenient Store and Kim's Mart. In one variety, there are chestnut chunks inside.

Daifuku can also be found in Davis. It is a mochi snack stuffed with the paste. It can be found at The Inconvenient Store, Ikeda's, and Kim's Mart.

Red bean pancake is also available as a dessert at Shanghai Town.

A fish-shaped frozen treat with a wafer-like coating can be found at Kim's. It has vanilla ice cream and red bean inside.

Kim's also sells red bean paste on its own so you can form your own creations.