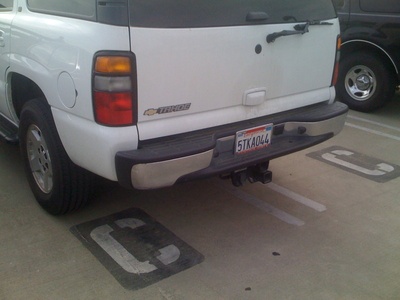 There are plenty of wonderful Tahoe owners, but this one is working hard to give the rest a bad name.

The Regal Cinemas Davis Holiday 6 Parking Structure is one of two multi-story parking structures in the downtown area.

Towards spring, Davis High physics classes use this structure to throw unsuspecting eggs off the top floor in the annual Egg Drop contest. Students compete to build contraptions that are supposed to protect eggs from shattering after being dropped from the top floor.

It has cameras on the stairwells, and "cell towers" bolted to the North West side

2009-08-16 02:22:50   The parking lot was designed for compact cars. When going into the parking structure you'll have to hope that another car isn't coming down, the path is incredibly narrow. As a matter of fact, if you look on the wall on the side that's coming down and out of the parking structure, where it's curving, there are numerous scratches on the walls from cars scraping up against the wall because two cars were going past each other in that section.

Not a nice place to park, it offers three hour parking, but the spots are incredibly small. It's almost like they wanted only Smartcars and Mini Coopers to park in this place. This is coming from someone who drives a four door sedan. If you drive a truck or a suburban, good luck, you'll need it. The picture above is biased, a Tahoe would go over the parking lines if it tried to park in the center. —IdealParadigm

2009-08-16 02:28:54   If your car can't fit, you shouldn't park there, rather than taking two spaces or potentially damaging another car. Owning an SUV doesn't give you license to be unfair to others... —IDoNotExist