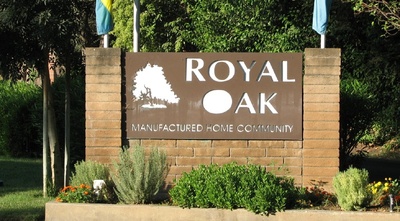 Royal Oak is a mobile home park just outside Davis city limits. It was originally known as Barthel's Mobile Home Park, laid out and operated by Harvey Barthel, a local butcher who moved to Davis in the 1930s. The park at that time was in an undeveloped area of Davis. Barthel named the streets in his mobile home park after his family members, including wife Erma and  daughters Artis and Louise.

Space rental is said to be reasonable by Davis standards and facilities considered by at least one tenant to be clean and well maintained. Other Northern California municipalities have unincorporated sections of town like this that have not been included by annexation. In some cases there have been lawsuits brought claiming discrimination based on socio-economic status or racial makeup.

The park had a slump in the 2000s, but seems to be much nicer now. Myabrn lived there 20 years ago when, she says, "it was nice and family friendly. Now it is not so." She goes on to say her family's trailer, "was turned into a drug lab that burned to the ground when the new owners attempted to incorporate the clothes dryer into their drug concocting process." In 2012, new management came in and people who live there are generally now reporting a much better experience.

Possibly the most iconic story out of Royal Oak during (causing?) their down era, was the fact that in July 2003, David Lawrence Beale was arrested when 157 pounds of human body parts were discovered behind his Royal Oak home on Erma Lane.

2012-08-11 09:06:50   An update on the park: There's a new manager, Trudi. So far, she seems really good. Rhonda, the previous manager was good, but she seemed to be burned out on the job. Some of the residents that caused the drama with respect to the Drug Enforcement Agency teams coming in are gone. I have no concern about safety in the park. It seems more neighborly than a few years ago.

The lease contracts here protect the park but potentially screw the residents in the long run, especially when it comes time to resell your home. I would ask the sales manager about recent sales of privately owned homes (not those sold by the park) to see if the situation has improved. You could ask the sales manager what the park would do to help ensure resale value of your home. —livegreen

2012-10-05 16:03:01   New 2012 Manager is pretty cool so far. The Park has lost most of the riff-raff that were requiring so many police visits (thank God). Regardless, there is still no way any homeowner can sell their home very easily. The previous manager, Rhonda, was price-matching what people were willing to pay for the owner-owned properties, and falsely denying residency applications to anyone seeking to buy an owner-owned home. She would always approve residency for anyone so long as it was a park owned property they purchased. Very biased. So most people here will eventually lose their homes to the park no matter how much work and money they put into fixing them. I have put $10,000 into my home and tried to sell my place 2 times by owner and with a realtor. Rhonda lowered the price on her 'park models' to match anything my buyers offered me. Also homeowners cannot compete with the Parks $499 'handyman special' rent rate because when you buy an owner-owned property, you pay where the previous owner left off paying. That's not fair because it wasn't that way when I purchased my home in 2005. I was started $200 higher than the lady I bought from - and they said it was determined by 'fair market value'. Now my rent is so high it is embarrassing to tell it to potential buyers. No one wants to live in a place where one person starts at $499 and the guy next door starts at $850. So if Royal Oak / Sierra Corporate Management would bring in new homes (and take out all of the Pre-1974 aluminum wire homes), and start the new ones at $650+ with 6% yearly increase; It may start leveling out the fairness of the rent in the community and enabling homeowners to start being able to sell their own homes. Royal Oak claims the rent inequality is fair because its only major dumpy homes that go for the $499 rent. But those majorly dumpy homes are eye-sores next to my majorly Non-Dumpy home. My home's condition is also judged by what is surrounding it...how does the owner of Royal Oak not know that? Buyers are not blind. But to be fair I will give Royal Oak one 'pro': It is close to very many amenities. —skilwhit

2012-10-06 07:31:14   I concur that the park has gotten rid of the "riff raff" who, while not threatening to other residence, did bring some unwelcomed drama to the park. Also, as a community, people seem to be getting along well.

However, it is true that the business practices of the park are still grotesquely unfair (and possibly illegal) to residents who've been around a while and especially for those who need to sell their homes. It seems that the business model is based upon driving people out by escalating individual rents to a absurdly high level and making it impossible for private owners to resell their units. So then the park acquires the mobile homes by default for the cost of a few legal fees. Then they are able to turn around and resell the units for cheap, undercutting private home owners, reinforcing the crooked cycle.

There are scenarios where it might work out well for you to live here. But I would ask the sales people for information about recently resold private homes (not sold by the park) and about the rents of long-time residents. —livegreen

2013-02-07 13:19:10   DO NOT DO BUSINESS WITH SIERRA CORPORATE MANAGEMENT, the company that owns this park. DON'T RENT FROM THEM, DON'T WORK FOR THEM, IF YOU SEE THEIR NAME RUN SCREAMING IN THE OTHER DIRECTION. They will lie to you and then screw you because you believed the lies. If you must rent anything from them, GET EVERYTHING IN WRITING, SIGNED AND DATED - and I do mean EVERYTHING. If it's not signed, dated and in writing, IT IS A LIE and if you believe it YOU WILL GET SCREWED.

And there will be no Vaseline. —LisaBriggs

2013-04-22 15:54:37   I agree with Lisa that you must get EVERYTHING in writing with Sierra Corporate Management. What any manager in the company tells you verbally is worthless. Most residents have some personal experience of getting screwed by the company. However, it still appears possible for people to have a generally positive experience living here.

The park location is so prime that if the park was managed well, there could be a waiting list to get in. However, this company doesn't seem to care about being fair, and they don't seem to put any value on good will and reputation. —livegreen