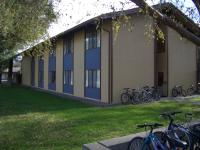 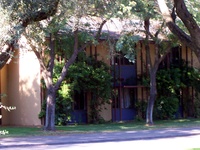 Sereno has foiliage growing on it's street side that make it pleasant.

Sereno Hall is located in the Regan dorms. It is the "Music, Arts, and Performance" Themed Dorm, or just simply the "Music Dorm". Some also call it the Sereno Insane Asylum. It's a rockin' place even if the facilities themselves are really old and kind of poor. It's a small dorm housing around 50 individuals which makes for a close-knit environment with a strong sense of camaraderie. The building is bordered by Regan Hall Circle on it's back side and Talara Hall on it's front. Sereno is also where the Raisin Question originated—for weeks Raisin Philosophers debated whether raisins are indeed food or not. The Sereno Hotties were formed here. There is a facebook group devoted to Sereno class of '03-'04 @this address and the Sereno Hotties @ this link. AnnelieseGuess is the Resident Advisor in Sereno for '06-'07.

As a graduate of Sereno I credit most of my life's accomplishments to the hours spent running crazy through these halls. Sereno '03-'04 was a good year. Sereno for LIFE!!!! - TimOldenkamp

As a periodic presence in Sereno, I can attest that, certainly, Sereno is responsible for most of Mr. Oldenkamp's behavior, but I do not believe that any one source can account for the full "personality" with which he presents us. - ChristopherCondap

I was a resident of Sereno Hall from 1992-1995 and was RA of the hall in the '94-'95 academic year. I have many fond memories of Sereno and the communities I lived and worked with. I often wonder if the muti-color paint job I gave the sign out front ever got painted over. I hope not. - NoahApodaca