Sexy Prison is Davis/Sacto duo comprised of Keenan "Concerto" Thompson (bass, electronics) and vocalist Kel "Dawson" Mitchell (also from Like Mike 2: Streetball and formerly The Steve Harvey Show), and together they churn out some of the best and most original electro-whatever-wave jams being pioneered on this planet today. Keenan's basswork is propulsive and melodic yet dark enough to satisfy any Joy Division/New Order fan, but if you talk to Keenan about them, he might tell you that Crimpshrine was a bigger influence; it's the one element of the Sexy Prison sound which might sound familiar because the rest is a concoction of clattery beats, repetitive sample sequencing, klings and klangs and klaxon reverberations set to odd elliptical patterns, humorously perplexing samples of familiar expressions of pop culture (e.g. Tim Allen's "unghh?" from Home Improvement), and Kel's uber-whacked reverb-drenched sneer. Jennifer Maerz of the Seattle Stranger wrote a Sexy Prison review which referenced Severed Heads; certainly the Priz does bear a striking likeness to the Sevs at times (particularly because both bands similarly used repetition in such a way that the moment that any sample or sound might become too cloying, that sound is replaced by a different odd sound), but Concerto and Dawson swear they've never even heard music, and that Slutty Gulag draws its primary influences from their balls and the television show "Cheaters."

Ben Duax claims the band name refers to the audience; you're in a "sexy prison" whenever the band plays. Apparently, it's the only prison you DON'T want to leave. He also claims the band found their name by watching the web page "metaspy" refresh google searches.

The band's discography is available at their website (PayPal accepted at live shows): 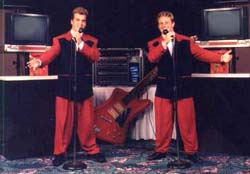