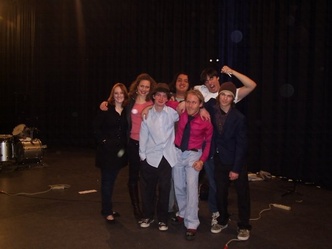 Behind the curtains after performing at Freeborn Hall

Sterling Riot was a seven piece folk/punk group originally founded by Rob Roy, described by Sacramento News and Review as "folk and punk, mixed with trains crashing and dragons dying." The full review can be read here. The music can be found at myspace.com/sterlingriot.

Originally a one piece band, the crew of castmates at one point included Rob Roy on guitar/banjo/vocals, Will Jobe on drums/backing vocals, Jackson Jordan on bass, Tobin Jones on lead guitar, Andy Voss on glockenspiel, Rachel Beane on violin, and Carolyn Cantwell on accordion.

The six current songs on the Myspace profile are:

All 4 tracks on the myspace were recorded by the band at Rob's house using Garage Band on Rob's eMac. The instruments that have appeared so far are the guitar, drums, accordion, and glockenspiel, bass, theremin, viola, some others, as well as many computerized instruments.

Rob was going to release a CD titled Love Letters to an Expatriate in mid September of 2005 but he'll most likely never release the CD. The band plans to record an EP of rough takes, appropriately titled "Rough", sometime soon in the next couple months.

And yes, the band's name was inspired by the riot at Sterling University Vista Apartments.

I would like to request a remake of the Aggie fight song.-JimSchwab