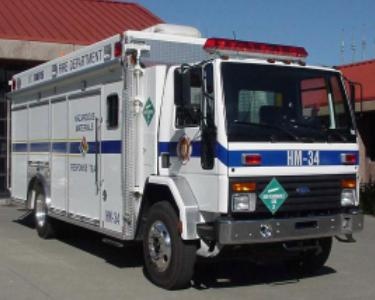 UCD Hazmat is a branch of the UC Davis Fire Department, they deal with really nasty things, and get called out when the research profs drop the ball in a really bad way. Albeit most of the time it's accidental but they have had there share of nasty things / stupid students synthesizing things they shouldn't etc.

With an increasing reliance on technology in our industrial society comes an increasing dependence on exotic materials dangerous to humans. This is particularly true at a large research university like UC Davis. Currently there are approximately 3500 research laboratories on campus housing any combination of the following: combustible liquids, cryogenics, explosives, flammable solids, flammable liquids, flammable gases, organic peroxides, oxidizers, pyrophorics, carcinogens, corrosives, irritants, radioactives, poisons, and other highly toxic materials not otherwise classified. These materials could pose a significant health threat to the students, staff, and faculty at UC Davis if an accident were to occur. ~ http://fire.ucdavis.edu/hazmat.htm

I'm Gonna Make this into a table sooner or later

Last time I checked Sarah Rosetto's dad was the bigwig on hazmat. —StevenDaubert

He is now happily retired! —StevenDaubert