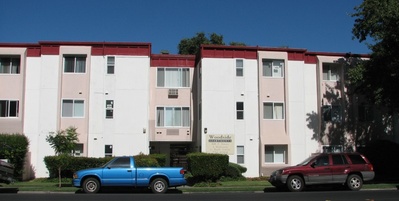 Woodside Apartments offers two-bedroom, 1.5 bath apartments for $1000/month with a $500 (approximately)deposit [Aug 2014]. The 1.5 bath measurement does not refer to a full bath and a separate half bath. Rather, it refers to two sinks, one shower, and one toilet, each separated by a series of doors. Hot water is included in the cost of rent, and the complex is located on a YoloBus line, as well as the Unitrans E and L lines.

Visit our Housing Guide or Apartments page to learn about more housing options within Davis.

2009-01-31 11:53:08   I've lived here for a few months now and think that it's a decent place for the money you're putting out. By no means is it new and sparkly, but the apartment complex isn't falling apart either. Its a quiet place that's not full of crazy parties, but the traffic at the F & 8th intersection can make up for that sometimes, especially on trash days. I like that there are two bus lines that stop at the apartment; it makes getting to UC Davis really easy. I've heard that other people in the same complex have had plumbing problems, but so far my apartment has been pretty (not entirely) maintenance free. Oh, and forget about using the pool except for the height of summer, they don't heat it and therefore it remains very cold year round. Otherwise, its a good place to live and I'll probably stay again for next year. —Jeserah

2009-10-10 10:44:23   I lived here for a year and the management was pretty good about fixing things when you asked but you really had to be kinda forceful about it. When I moved in there was a huge (what we guessed was) barf stain on carpet and when we asked if we could have the carpet cleaned they said it was a stain that wouldn't come out, but after lots of pushing they cleaned the carpet and the stain was gone for the rest of the time I lived there. Also, while the manager is super helpful when living there watch out when your moving! She will inspect your apartment and get you for every little thing possible. And she was just kinda mean and rude. To get my deposit back I had to leave my apartment 10x cleaner when I moved out then when moved it. I also experienced the same problems as EricaMacGregor below. So, if you want a cheap apartment for a year then go for it, but beware that there will be way more than a few pain in the butt moments living here. Good Luck! —londcalling87

2009-10-22 02:39:19   I've been living here for four or five years and I'm very happy with it. Maintenance is very responsive, management is really nice, and bedrooms are big (and each with its own vanity in a sort of sub-room and built in desk and dresser). —MichelleWarren

2009-12-11 17:24:28   Management is very nice and friendly. Rent is reasonable. However, if you have electrical or plumbing problems, don't expect to get them fixed. The lights in the bathroom went out, and, being on the shorter side, standing on folding chairs doesn't really work. Two repair requests later, nothing has been done. Additionally, I dropped a necklace down the sink, and tried to get it out. The pipes underneath the sink are kinda rusty, as well as the pipes in the bathroom, so I'm wary of trying to get it out myself. Submitted a repair request, called twice and....still no luck. Least responsive management i've ever had. Pros: nice room size, decent rent, friendly management. Cons: Nothing gets fixed. If you want a place to live for a year, its not too bad. If anything goes wrong, don't expect it to get fixed, ever. If you want responsive management, I recommend living at Sycamore Lane apartments-they fixed everything, although rent was a bit on the pricey side. —malc

2010-08-05 17:20:23   I've lived here for 6 years and I like it well enough to keep staying on. A few of the major pluses are location (2 blks. to the Co-op, 5 blks to dwntn, 10 min. bike ride to campus), room size (9.5 x 20 including the built-ins and vanity area), and affordability. This complex isn't going to win any design awards, but it has all the basics covered; on-site laundry, two parking lots, bbq and shaded table area, and bike friendly. The noise of the nearby train tracks are not an issue for me and they also include a nice walking path. The garbage and recycle trucks do visit early a.m. a couple of times a week, but they are very quick. I see them several times a month as I often work early, and they are in and out in two minutes. The pool is gone, which I miss, however the tables and fountain make for an alternative place to study and work, and the area is wi-fi accessible. It is also a quieter complex with a diverse mix of students and community members. What the place could use is a composting area, veggie garden, and a clothes line or another dryer. If your looking for something shiny and new keep looking there are plenty of them. If you want a large room in a quiet great location at an affordable price this might be your place. —TomCronin

2010-08-31 16:48:50   Its been a year since I lived there. I decided to wait on writing a comment so I could see what its like at another apartment, just for comparison. To sum it up, WOODSIDE IS ABSOLUTELY TERRIBLE. GHETTO AND SHADY are good words to describe it. Here are the reasons: the apartment I lived in had TOILET PROBLEMS, HEATER PROBLEMS, and COCKROACH PROBLEMS!!!! The toilet would flood often. So often that I bought a heavy-duty plunger at Ace hardware. I cant really say weekly because it would be weekly for a while, then stop, then start again. With the heater, we wanted the gas one turned on. I called PG&E and the guy came and said he couldnt turn it on because there was no wall between the pilot light and the bath tub. So we were without heat for a while. The manager gave us something like 3 little electric heaters. The electric heaters, by the way, would throw the breaker, so we had to use only 1 at a time that was plugged into the kitchen with an extension cord. Later the manager hired some dude to light the pilot light. He said it was fine. It worked fine so we were like "whatever, we have a heater now." What was the last problem?? Oh yea, COCKROACHES!! In the spring and summer cockroaches started showing up, so the whole apartment had to be sprayed...dead cockroaches EVERYWHERE! I swept up a pile of them with a broom!! I still have pictures by the way.

During the walk through, Alice was intolerable to say the least. We left the apartment in pretty good shape, it was only 3 girls living there so you have an idea of the wear and tear the apartment went through. We cleaned the apartment to what we thought was pretty decent. Alice came in and on top of nit-picking EVERYTHING, she tried to convince us to polish the cabinets. My family rents a house so I know the rental laws are strongly on the renters side. So I said I'm absolutely not polishing the cabinets, because thats not my job. She was like "All you have to do is take some soap and oil and wash the outside of the cabinets, thats not polishing!" haha. She also tried to rip us off. Although it specifically said in the contract that its the owners job to pay for a carpet cleaning, she wanted to charge us for it. When I showed her the rental agreement that we all signed, her response was "nobody reads those". I almost called the police because we were at an impass! Finally she backed down and gave us the deposit. She made my friend across the hall clean the freaking window shades!!

Anyways the moral of the story is pay attention to what you sign and dont let them rip you off if you live there.

I'm just moving out of the other apartment I lived in. No toilet problems, and it took the manager 10 seconds to look at the apartment and give me the deposit back so I know now that walk-throughs arent always the horrible ordeal that it was at woodside. —djb232

2011-02-25 23:04:22   The only up side to Woodside is the location. Other than that the place is very old. There's ALWAYS plumbing and water issues. Maintenance takes forever to response. Someone is always cutting the grass very early so it's noisy. Plus being so close to other apartments its always noisy. Cheated us $300 out of our deposit when we moved out. But we already moved out and didn't have any pictures to disprove them. DON'T LIVE HERE. —liaface

2012-05-21 22:23:23   I have been living here for a year. I am fine with a lack of amenities, crappy dryers, expect to not find parking in either lots when I party late, even fine with the smell of car fumes that blows in from the parking lots (a good chunk of the bedroom windows face both lots), i am even fine with the musty smell that comes from not having enough air ventilation in the bathroom/shower area—but ROACHES are absolutely unacceptable!!! Stay away. This place has roaches. Get up at 3AM to use the bathroom—they are there. In the kitchen and in the bedrooms. It's an epidemic in this complex. If you are one with creepy crawlers then you might just be okay. Perhaps this is the cheapest place. I know—I'm a poor student. But, you have been warned. —cassidycascades

2014-05-20 14:05:28   Does anyone know why bees are always staggering around on the sidewalk on the F street side of this complex? I have not seen them act that way anywhere else. —Psittacosaurus

2014-06-17 12:09:39   I lived at Woodside Apts. from 2005-2008, then moved away, then moved back to Woodside Apts. from 2010-still there! It is an older building, but very quiet. If you are looking for a party building, then Woodside Apts. is not the one. I read comments about roaches and it could be true for some people because they are not very clean to begin with. I have never had a problem with roaches, but have seen a few apartments that did have roaches. The problem can be taken care of if people inform the Management right away, and they keep their apartments clean!!!!!!! Some people are very filthy, so what do you expect, wow bugs, bugs, bugs!!!!!!! The rent is very reasonable, especially since Davis is very expensive. The on-site Assistant Manager is very nice and helpful. It is not a bad place to live for the price!!!!!!! —RockinRH