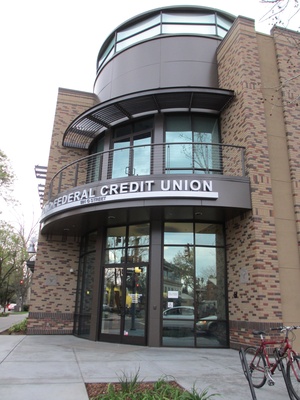 Credit unions are not-for-profit cooperatives that offer all of the services of a bank such as checking and savings accounts. Membership is open to anyone who works, resides, or worships within Yolo County. Credit unions are owned by their members unlike banks which are owned by shareholders. Credit unions give back their profits to their members and also reinvest their profits into the local community. Yolo Federal Credit Union is a member of CO-OP Financial Services, which includes a shared network of 28,000 ATMs at credit unions across all 50 states. Members can get cash, make deposits, and transfer funds at CO-OP ATMs without fees. This network has more ATMs than any other bank. Bank of America for example only has 18,000 ATMs and their ATMs are only in some states.

Credit unions are insured by the NCUA (National Credit Union Administration). This insurance is just like the FDIC insurance for banks and your money is insured up to $250,000. Your money is just as safe and secure at a credit union as at a bank.

Yolo Federal Credit Union is also a member of the MoneyPass ATM network. That means that members can get cash at MoneyPass ATMs (including US Bank ATMs) for free.

Yolo Federal Credit Union also features envelope free ATMs. These machines scan your checks and can print images of your checks on your receipts if you wish. 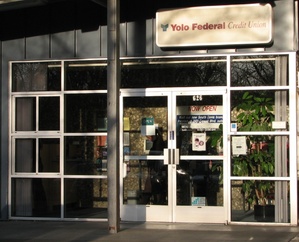 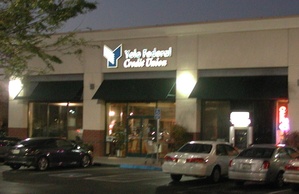 2010-07-22 16:15:07   I can not tell you how inept this bank is! Upon trying to open a new account, they keyed my SS# incorrectly and caused a giant fiasco with my credit report in ChexSystems. They made it look like I was conducting identity theft, then treated me a little bit like a criminal. I think I'll try Sacramento next, as the other credit unions in town are not that much better. —RobynW

—It is an unfortunate error. People at any bank or financial institution can make a mistake in typing. Any errors in ChexSystems will not have any effect on your credit score or your credit rating. ChexSystems simply logs how many checking accounts a person opens in a given period of time. Some banks might use ChexSystems to determine whether or not to deny a person a savings or checking account, but it won't affect your credit score or rating. After 5 years, the information in ChexSystems will be gone. The slate will be wiped clean. If you are opening a bank account, always jokingly say "Make sure you type in my social security number correctly. Please double check. I want to make sure everything is accurate." —MaxLucas

2012-06-11 11:37:24   I pulled my accounts from WaMu/Chase after the "Too Big To Fail" bailout fiasco and spread my business accounts over several local banks to see who I wanted to deal with. I had high hopes for Yolo Federal to start. However, after endless headaches over their online system and fees and penalties on so called "free" checking accounts, I finally had enough. The thing was, I tried on several occasions to explain how frustrating it was to try to remember which account had what requirements and that I just wanted accounts that I could use without always having to think about their special rules and circumstances. No one seemed to care. They still didn't care when I closed my accounts. They simply shoved another piece of paper in front of me to sign, and told me to surrender my ATM cards. First Northern got my business and personal accounts in the end. They have great service, their staff are super friendly and they're local. Their online banking could be a bit better but it's workable. —BrianSipp

2012-07-06 19:30:48   I am very pleased with the exceptional service Yolo Federal Credit Union's new downtown office provided. I had an auto loan with Chase, and went through a long and tedious process getting my loan processed with Chase. I was also charged a $75 loan origination fee by Chase. After learning more about credit unions, and seeing the non-profit structure and principles of giving back to the community, I decided to give Yolo Fed Credit Union a try. I ended up refinancing my auto loan with YFCU, and it only took approximately one and a half hours to complete (compared to almost a week-long process with Chase, having had to wait for forms to be sent to me, and then sending forms back, along with quite a bit of time spent on the phone with them). Pablo at the Davis office assisted me for the entire process, and was patient, friendly, and provided exceptional service. He not only treated me professionally and was very personable, he also seemed to be very customer-centered with other customers as well, as I had the opportunity to watch him help other customers in passing. The level of service far surpasses those I received from Chase during my loan process with them. Note, Chase was not unfriendly, but they just did not provide the level of customer service I received at Yolo Fed Credit Union. I also went ahead and opened up new personal savings and checking accounts with YFCU as well. My main reason for switching to a credit union was based on principle—I was disillusioned by the "big banks" (i.e. Chase), and was prepared to repay my auto loan at a higher rate with a credit union just to get away from Chase. In the end, I received a refinanced rate almost 1% lower than what I had with Chase. It was explained that without obligations to investors and trying to maximize profits, Yolo Federal Credit Union is able to keep costs down and that translates directly to benefits to credit union members. Additionally, I did not have to pay any loan origination fees (compared to the $75 I had to pay Chase). The only payment I was required to make for this process was the $10 membership fee to join Yolo Fed Credit Union, but that is well worth it, as I will be making that up (exceeding that) with my first auto loan payment because of the much lower interest rate I was able to get from YFCU. I highly recommend this credit union if you are looking for an alternative to "big banks". —DanJ