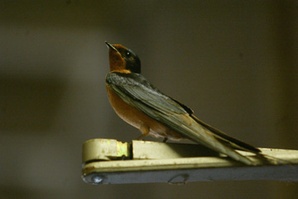 Adult barn swallow perched on a doorjamb at the Old Firehouse. Photo by Elise Kane. Barn swallows, hirundo rustica, populate regions all over the world. They are insectivores, meaning their diets consist of insects only. "Barnscaping"—architecture constructed to help sustain nesting birds—is particularly good for the barn swallow. This is because the swallows' mud and plant matter nests last well under window eaves, or at the intersection of walls and roofs.

Barn swallows spend the winter in Mexico, Central and South America. Barn swallows tend to return to the same nests year after year in groups of one to several pairs. If a colony decides to sully your home's new paint job with mud and droppings, it may be very difficult to remove. The birds are not easily fazed by decoy owls, shiny materials such as CDs or reflective ribbons, or loud noises. They will also continually rebuild their nest should their old one be destroyed. Furthermore, it is illegal to touch swallow nests between February 15 and September 1 without a permit. See http://www.ipm.ucdavis.edu/PMG/PESTNOTES/pn7482.html for more information. 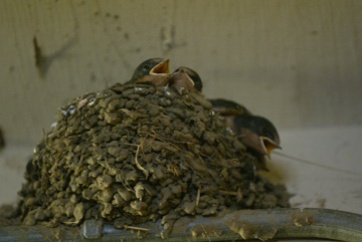 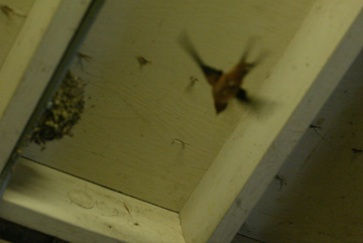 These little guys swarn when they hatch. it's amazing watching the cyclone of barn swallows that flys around the grande school site —StevenDaubert