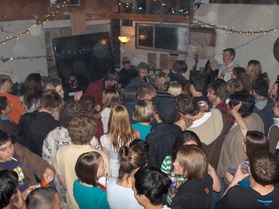 The hall of justice is the house on the southwest corner of 5th and Ist. It's been a Davis Waterski Team house for an unknown amount of year (but believed to be since the early 90s) and is fond of holding concerts and various other parties. The name supposedly came from the Wondertwins that lived there at one point and it was where all the super friends convened for business matters. The spelling is said to have the "STI" capitalized to stand for the street of I.

The house occasionally operates as a venue for concerts. Sex, Funk & Danger had its first show ever here back in 2007. Its ideal location near downtown makes the parties normally fill up to maximum capacity so make sure to get there a little bit early. This is also the location of Mike's Bar which is known for being the go to place after 2am when downtown closes up.