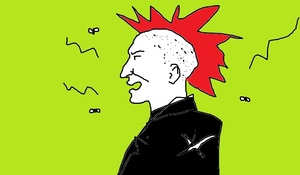 Artist's interpretation of a Fry Rat.

Fry Rats were a Homo sapien sub species which crawled out of the trenches of late 20th century Fry Street.

Most Fry Rats were younger people, teenagers and young adults, who didn't often bathe, and frequented hang outs like The Tomato. With the 2007 closing and destruction of The Tomato, and the closing of many other Fry Street cafes (like Kharma Cafe), the Fry Rats migrated to the square, and began to populate Jupiter House. However the owners of Jupiter House, who, at the time, ran a 24-hour cafe, changed their hours in an attempt to extinguish the infestation. They were mostly successful, and today Fry Rats are a much rarer sight, with a maximum of just one or two begging for money on Fry Street at any given time. Beggars were often referred to as Alterna-Pigeons, though in the late 1990s they more frequently were referred to as "Grunions". 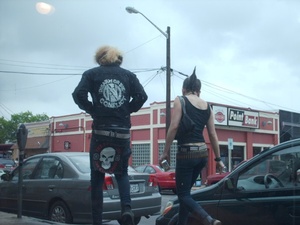 Fry Rats circa 2006. Also featured by these crooked crust punks is the old Point Bank Building, which is now the much cooler Crooked Crust pizzeria