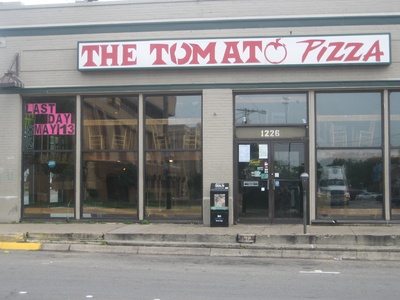 The Tomato (formerly The Flying Tomato) is the name of both the pizza place that was burnt down on Fry Street in 2007, and the new pizza place in Sanger. 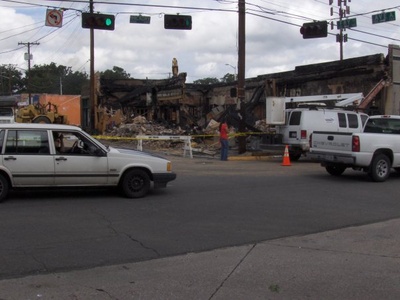 The Tomato after the fire.

The Tomato opened in August 1984. It was really ghetto, and had years of graffiti on every square inch of the store. It was a beloved hang out. Fry rats often congregated outside, and actual rats often did inside.

When the Tomato closed in 2007, the Fry rats started moving in on Jupiter House, apparently. That's supposedly why Jupiter House doesn't stay open all night anymore.

The Tomato was the victim of arson. Which kind of sucked(It was basically attached to Cool Beans, and there were still people in there). Everyone remembers where they were the night The Tomato burned down.

It was reported by the Denton Record-Chronicle that former owners of The Tomato had entered pre-lease negotiations in the new development and were set to reopen the establishment. Plans changed, however, as the Tomato reopened in Sanger, on May 13th, 2011. However, the Tomato in Sanger officially closed on October 25th, 2012. Long live the Tomato!