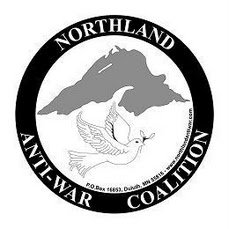 The NAWC was a key organization of the Twin Ports's anti-war movement from 2002 until its official dissolution in January (?) 2015. The group's main focus of protest was the U.S. wars in Afghanistan and Iraq.

The NAWC was an umbrella group made of local chapters of the the following organizations: Veterans for Peace. Women for a Sane World, Grandmothers for Peace, Students Against War...
(please complete list)

The group was best-known for its Friday afternnoon vigils at the Minnesota Power Plaza at Superior and Lake Streets in downtown Duluth. These weekly protests began in 2007 and are believed to number 388 in total. The last of these protests was held on January 23, 2015

(Can anyone add some pictures here of the weekly protests?)