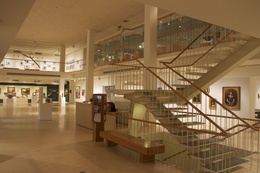 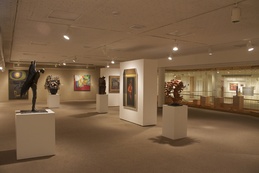 View of the Court Gallery, upstairs 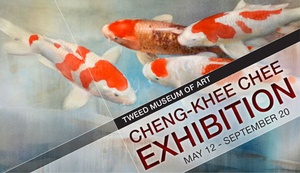 Tweed Museum of Art was established in 1950 when Alice Tweed Tuohy, widow of George P. Tweed, donated their house and an approximately 500-piece American and European art collection to the University of Minnesota Duluth (UMD) to enrich the lives of the people in the academic and civic communities of the region. Following its initial operation from 1950-58 (out of the Tweed home), a museum facility was constructed on the UMD campus in 1958, with funds donated primarily by Mrs. Tweed and her daughter, Bernice Brickson. The museum has been expanded and renovated four times between 1965 and 2008. Today, it operates in a 33,000 square-foot facility with 15,000 square feet of exhibit space and offers nine galleries to service an average of 33,000 visitors each year. Of great artistic, cultural, regional and historical significance, the collection is the focus of all museum activities. It contains 15th-21st-century European, American and world art in all media by artists of regional, national and international importance, including outstanding work by artists from the Upper Midwest and Minnesota. In 2007, the museum acquired the Richard E. and Dorothy Rawlings Nelson Collection of American Indian Art, an acquisition that opened new programmatic territories. By establishing a modestly comprehensive historical canon, the Nelson collection opened the museum to build upon it by collecting contemporary (particularly Woodland) American Indian arts.

The museum is located on the campus of University of Minnesota Duluth and serves the city of Duluth as well as a larger geographical region of the upper Midwest extending as far as southern Ontario, northwestern Wisconsin and Michigan, and the eastern Dakotas. The Tweed Museum of Art (TMA) is the largest visual arts organization and the only fine arts collecting museum north of the Twin Cities in Minnesota.

Beyond its region's borders, Tweed enjoys relationships with museums around the world. Artwork circulates from the Tweed collection both nationally and internationally. Recent world exhibitions featuring artwork from Tweed’s collection have taken place at the Smithsonian’s National Museum of the American Indian, at the Prado in Madrid, Spain, at the Complesso del Vittoriano in Rome, Italy, and at prefectural museums throughout Japan. 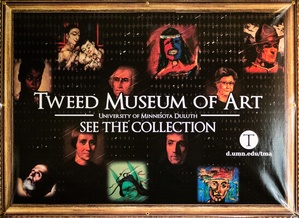 Go to the Tweed Collection