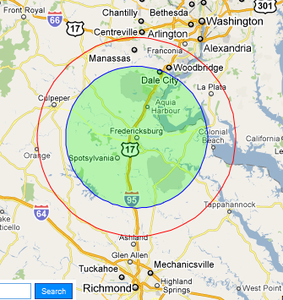 The Fredericksburg Region often means the area where people live and work. Sometimes they are referring to the City of Fredericksburg and its commuter suburbs, but that often transforms into people working in the suburbs and living in the exurbs. Because of our reliance on the automobile, the growth of the suburbs and exurbs has followed the road system rather than other modes of transportation.

Commuting by automobile impacts regional definition and growth because the controlling variable is usually commute time versus commute distance. The balance between the capacity of the road network and the volume of traffic has a tendency over time to equalize and impact and control growth. 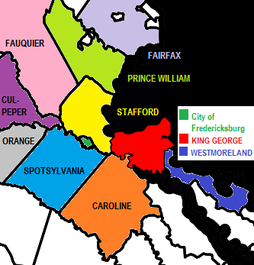 Graphic by BradMandell We start with the City of Fredericksburg surrounded by Stafford and Spotsylvania Counties and the nearly adjacent King George, Caroline, Culpeper, and Fauquier Counties. Fredericksburg is also a draw on some folks in southeastern Prince William County, in eastern Orange County, and western Westmoreland County.We could extend the area's reach to some towns within a wider radius to include Warrenton, Culpeper, Orange, Ashland, Tappahannock, and even La Plata, MD.See Also:Politics

This statistical treatment allows one to look at the defined area in terms of a number of data points. 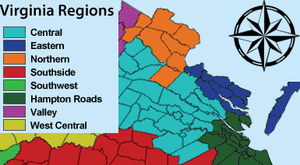 Graphic by BradMandell from VA Performs The State of Virginia divides the state into eight economic regions and includes the City of Fredericksburg as well as Stafford and Spotsylvania Counties in the Northern Region.The assignment gives some credence to treating Fredericksburg as part of "Northern Virginia".

The Fredericksburg Region might also refer to a variety of areas served by various government or nonprofit organizations. These definitions are usually very specific to the servicing unit and can vary from the immediate city area, to the county, to all of Northern Virginia.

Please see our Talk Page for comments and discussions about this page.