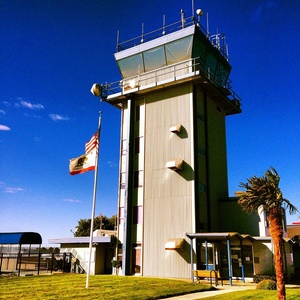 A former WWII fighter base, the Hayward Executive Airport is situated on 543 acres in West Hayward with two parallel runways 5,694 and 3,107 feet long. Over 450 aircraft are based there, from single-engine airplanes to sophisticated corporate jets.

The airfield was built in 1942 during World War II. In those days it was officially known as Hayward Army Airfield, and colloquially known as “Russell City Army Air Field" after the then-unincorporated area of Hayward where it was located.

During the war, it served as an auxiliary field to Chico Army Air Field. The primary aircraft in those days were Lockheed P-38 Lightnings. Many other classic fighter planes and other aircraft flew in and out of Hayward airport over the years. Enthusiasts can readily find more information about specific planes online, or by visiting the airport’s new administration center.

After the war ended, the airport was decommissioned from military service and declared surplus property. In April 1947, the War Assets Administration “quitclaimed” (gave away) the airfield to the City of Hayward. The airfield was then renamed Hayward Municipal Airport.

The five-story control tower was built in 1961, with Federal Aviation Administration offices in the top three floors. A new administration building was recently constructed next to the tower.

The airport is financially self-sufficient and provides 300 jobs and $300 million in economic benefits. It holds an annual open house, conducts airport tours, and makes presentations to school and civic groups upon request.

The West Hayward area around the airport is a destination-rich environment and a great place to spend a day in Hayward. The immediate area features Skywest golf course, Kennedy Park, the McConaghy Estate historic house, Southland Mall, and the Skywest Commons retail center. Further to the west, the Hayward Regional Shoreline offers abundant nature hiking, birdwatching, and interpretive opportunities.