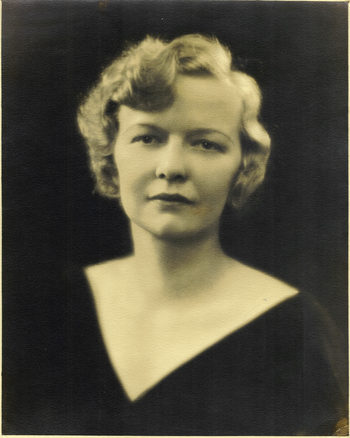 Bessie Isabel Fridman (nee Yungren) was owner of the Marinello Beauty Shop in the 1930s. She came to Saranac Lake to care for her sister Marie, who had tuberculosis and later died. She married Harry L. Fridman, Sr. in 1913 and they had one daughter who did not survive infancy, and a son, Harry L. Fridman, Jr. She and her family lived at 8 River Street in 1915 and 19 Riverside Drive in 1930 (per census). Her salon was frequented by the stars of the tent theatre behind the Haase Block, and as a result, she met and became close friends with Rosalind Russell.

She rode horses and was a founding member of the Adirondack Bridle Club. She moved to Puerto Rico, where her son lived with his family, for the last 15 years of her life, and died there in 1975. 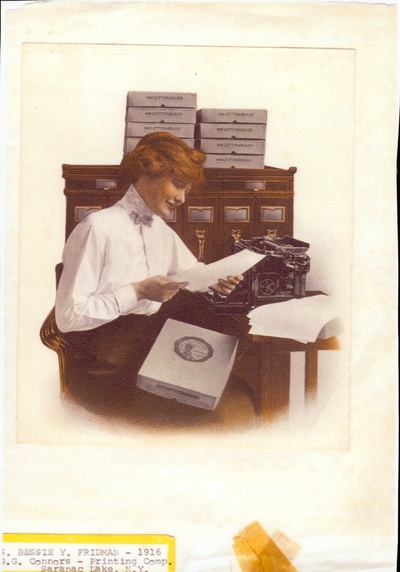 SAN JUAN, PUERTO RICO — Mrs. Bessie Y. Fridman, for more than 35 years a resident of Saranac Lake and for the past 15 of Puerto Rico, died Sunday. Feb. 23 of a cerebral hemorrhage at San Juan's Auxilio Muruo Hospital. She was 83 years old.

Mrs. Fridman, the former Bessie Yungren, went to Saranac Lake about 1910 to care for her sister Marie, who had contracted tuberculosis and later died. She was born in Brooklyn, and had a promising career as fashion model, and in the early movies when the Vitagraph Studios, predecessors of the Hollywood movement, opened in Brooklyn. Bessie Yungren was in the company, in bit parts, with legendary figures such as Mary Pickford, Dorothy and Lillian Gish, Douglas Fairbanks, Bebe Daniels and Ben Lyon.

She married Harry L. Fridman, also-curing for tuberculosis and an early patient of Dr. Baldwin and Dr. Trudeau, in 1913. A daughter died shortly after birth and her only son was born in 1915. Mr. Fridman died slightly over a year ago after having been a resident of Saranac Lake for more than 75 years. He was 96 at his death.

Mrs. Fridman studied beauty culture and for years had one of the largest beauty salons in northern New York During the era of the Adirondack Summer Theater in a tent by the Saranac River, behind the Haase Building, the actresses, and frequently the actors with them, rehearsed their lines in the old Marinello Shop while Mrs. Fridman's operators dressed their hair. Among them, and one who became a close friend for several years, was Rosalind Russell.

Mrs. Fridman became interested in horses when she was past 40 and was an avid rider and a founding member of the Adirondack Bridle Club, which had as its headquarters Walter Weir's stables, off upper Broadway. Mrs. Fridman is survived by her son, Harry, two grandsons, Peter and Eric, a granddaughter, Carmen Elisabeth, and four great grandchildren, all of whom live in Puerto Rico.

Information provided by her great-granddaughter, Nannette Fridman Postel in 2021.