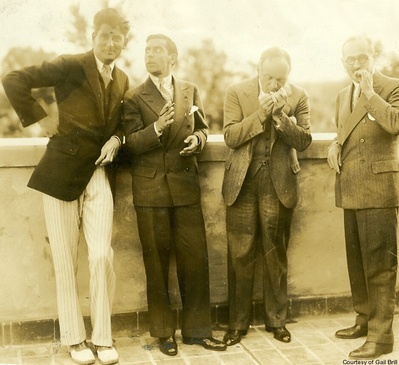 Eddie Cantor was a comedian, dancer, singer, actor and songwriter who got his start in vaudeville, and went on to do Broadway musicals, radio, movie and television audiences. His agent, William Morris, brought him to Saranac Lake to promote the Saranac Lake Day Nursery.

Through his radio shows he was familiar to millions. His hits include "Makin' Whoopee", "Ida", "If You Knew Susie", "Ma! He's Makin' Eyes at Me", "Margie" and "How Ya Gonna Keep 'Em Down on the Farm After They've Seen Paree?" He also wrote songs, including "Merrily We Roll Along" and the Warner Brothers Merrie Melodies cartoon theme.

His eye-rolling song-and-dance routines led to his nickname, "Banjo Eyes" after the artist Frederick J. Garner caricatured Cantor with large round eyes resembling the drum-like body of a banjo. Cantor's eyes became his trademark, often exaggerated in illustrations, and leading to his appearance on Broadway in the musical Banjo Eyes (1941).

His charity and humanitarian work was extensive, and he is credited with coining the phrase and helping to develop The March of Dimes.

A supreme court for the final settlement of all disputes In the National Variety Artists' Association1 was announced yesterday by Eddie Cantor, newly elected president of the N. V. A., who said at the same time that the present arbitration committee would be retained to make all preliminary decisions.

The purpose of the final court of appeal, according to Mr. Cantor, will be to obviate all misunderstandings by a double hearing when it is warranted by the circumstances. The officers and directors of the N. V. A. are now choosing the members of both the arbitration board and the supreme court. Their names will be announced on Aug. 31 when Mr. Cantor and other new officers will he inaugurated.