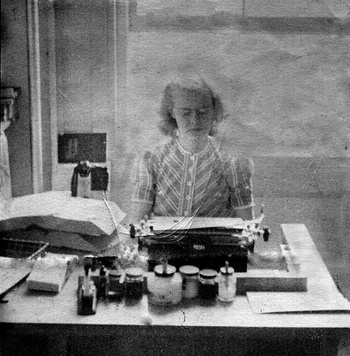 Evelyn Outcalt attended New Jersey College for Women, which later became part of Rutgers University as Douglas College, and graduated in 1938 with a degree in journalism.

In 1941, she married George Outcalt and in 1959, they moved to Saranac Lake where she was hired at the Adirondack Daily Enterprise by publisher Roger Tubby who started her at proofreading.  Later, publisher Bill Doolittle moved her to reporting on the Associated Press wire. After 15 years at the Enterprise, in 1975 she became editor, a post she held until her retirement in 1980.

After her retirement, she and Judy Kratts wrote a history of the First Presbyterian Church of Saranac Lake which is available in the Adirondack Room of the Saranac Lake Free Library.  She was one of the first women elders of the church.

A complete obituary was published in the Adirondack Daily Enterprise on April 30, 2019.